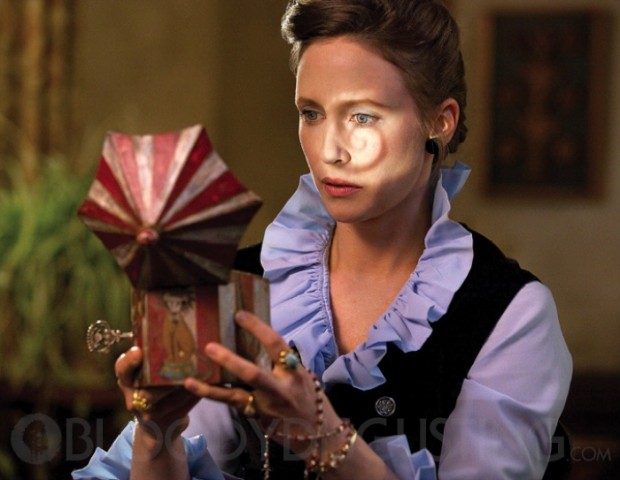 
The Conjuring is not quite as good as The Exorcist but it is close. This is not a run of the mill horror film, filled with violence and blood spatters. It is an emotional horror story that has bumps in the night but mostly brings knots to the stomach as the folks in the Perron family fight a demonic ghost from the past.

The script based on work of the true life folks Ed and Lorraine Warren revolves around an old house which the Perron family moves into. The mother played very effectively by Lili Taylor along with her husband (Ron Livingston) settle in very quickly with their five daughters.

It takes time for us to warm up to the family and to get to know their individual strengths and weaknesses. Once we know the group well enough to care about them, the ghosts begins to take over. The origin of the haunters goes back to the 19th century when the house was new and a little girl was killed by her mother. All these new little girls in the house brings the demon to the surface scaring the kids and mom with antics during the night.

Doors slam, legs are pulled during sleep, mom is covered with bruises, the cellar door slams shut and the lights go out. Apparitions float around the building and secret passages are located in the walls. Ancient toys bring ominous visions of the character and look of the ghosts and one family member is chosen to attack the littlest daughter.

The timing of the troubles for the family are timed and creep up on us slowly but when the attacks come we know this is a frightening film to watch. Frightening with noise and sudden action that makes jump in our seat which we are holding onto waiting for the bad things to happen.

The Conjuring gives just what it should a film that is scary, not bloody but tense both in vision and tension, it even has a little bit of a Hitchcock film flying around the house at a critical time.