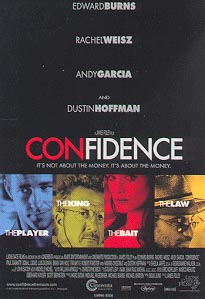 A smart thriller with well-drawn characters, Confidence, isn't a con for a good heist picture.  James Foley, whose work has ranged from Reckless to Glengarry Glen Ross, directs with energy from an intriguing script from Doug Jung.

With stylish flourishes from a solid production that adds urgency with sharp contemporary visuals like tinting and freeze frames there's plenty of atmosphere on a screen that features an accomplished, diverse cast.

Edward Burns (Sidewalks of New York) plays Jake Vig whose clever grifting in a well-staged con in a shady bar with everyone in on it leaves one person shot.  The unsuspecting mark (Leland Orser) turns up dead; he happens to be the accountant for Dustin Hoffman's gum-chewing mafioso Winston King.

Foley works hard to appeal to those looking for contemporary feel for a complicated scam.  The scheming in Los Angeles contrasts the traffic with smooth embezzling talk.  There'll be some things to do over international borders and the intricacies Jake must deal with include fears created from restrooms.  Burns give Jake a decent quality as the emotions beneath his suave business exterior may breach the ultimate conquest.

Operating from a "Deep" strip club, the ominous Winston is a delectable role against type for Hoffman with some amusing quips that harken back a little to his Lenny days.  And besides the offbeat lewd wit from Hoffman, Rachel Weisz performs with independence and brash sexiness as an LA club girl brought in as bait by Jake, and Andy Garcia an FBI agent.

As a film about wheeling and dealing and plenty of double-crossing, Confidence has more going for it than Basic or Heist even if the premise is time-worn.  That's primarily due to the locations and characters.  The inspiration comes from the con it self.  Disarming, though, and trendy are qualities that Foley discovers from the work of a talented cast and crew.