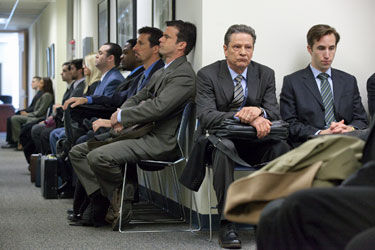 
This new, wavering ensemble drama analyzes the effects of corporate downsizing on families and communities.

About a year after the stellar, if later frowned upon Up In The Air, a specialized, somber cousin in The Company Men latches onto what continues to plague a country where many economic analysts have claimed that a long recession has reached its end.

In this new film by John Wells (best known for his work on "ER"), upper-class six-figure earners like family-man, Porsche owner Bobby Walker (Ben Affleck), Gene McClary (Tommy Lee Jones), and Phil Woodward (Chris Cooper) are given the pink-slip by their big manufacturing employer GTX. In carving out a life of luxury for themselves, they've failed to muster savings in case of the inconceivable, relying on bonuses instead of a nest egg.

So, those like Bobby, as Affleck (who made the fine, gritty heist drama The Town) has shown his affinity with the working-class average guy, are among the casualties frequenting job centers crunching out resumes and reaching out to employers who don't have much to offer.

Without the satirical snap, storytelling vibrancy of the aforementioned George Clooney star of a road movie of frequent firing (almost like an airline commercial at first), The Company Men relies on a decent cast to underscore the economic reality. Jones has some scenery chewing as GTX original partner did in by the CEO (Craig T. Nelson). Maybe more watchable and relatable though underwritten is the Woodward part as the usually crafty Cooper makes for a fiery corporate desperado. And, Affleck's Bobby is offered a sheet-rock position from his brother-in-law, done with a lighter blue-collar touch by Kevin Costner.

Wells may have a more discerning audience in mind for what is a hard-sell during a season where many scrounge to bring a smile to loved ones and their kids. The drama comes on a little heavy at times and is often squeezed out by some unrefined storytelling. Given such a gloomy familiarity, thematic resonance from loyalty and pride of lives defined by careers isn't enough of a payoff. Even with some notable support on the distaff side like Rosemarie DeWitt's misses and Maria Bello's brassy and venomous Human Resource officer.