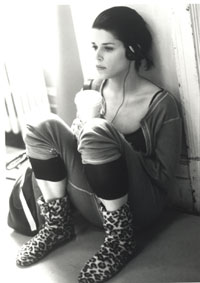 With The Company Robert Altman unspools an intimate experience into Chicago's Joffrey Ballet that is a successful collaboration with Neve Campbell, the Scream actress who rekindles a passion she once had before being noticed by Hollywood casting agents.

This season in the life of chronicles all the pain from tearing one's Achilles tendon to rehearsals and performances that are not the type of ambitious, dramatic effort Altman has been known for, like Nashville and, more recently, Gosford Park. This ode to the art and challenge of dance has a high degree of clarity, thanks to Campbell's closeness to the project and Andrew Dunn's varied high-definition video lensing.

Campbell put the story together with screenwriter Barbara Turner (Pollack co-writer) and co-produced the film, not using her star persona to hog the limelight as her Ry is like the viewfinder for one to experience something that doesn't aim to be like The Turning Point.

One of Altman's gifts is to bring a theatrical quality to the subjects that he stages with much detail and eloquence. Here, he peers in at the Joffery members as they prepare for the crucial Blue Snake performance. The preparation and dedication that Ry initially shows confers that she is closing in on being a principal dancer.

The character outlines from Turner suggest a stereotypical quality like Ry's prodding mother (Marilyn Dodds Frank). Her attitude affects the relationship of Ry, who supports herself as a cocktail waitress, with new chef boyfriend Josh, a likeable James Franco of Spiderman. The constant grind to make ballet the goal for all involved is embodied by the imperious, flashy Alberto, modeled after Joffrey lead instructor Gerald Arpino and acted by Malcolm McDowell.

Again, the aging but astute Altman shows he can be light on his feet when working with someone like Campbell who streaks through something close to her, knowing what can come from all the bruises and callouses. And the exquisite routines of the ballet in The Company that result from holding fast in the face of a tyrannical director and being motivated to keep one dream's alive keeps one absorbed into what could be the turning point of a selected few.