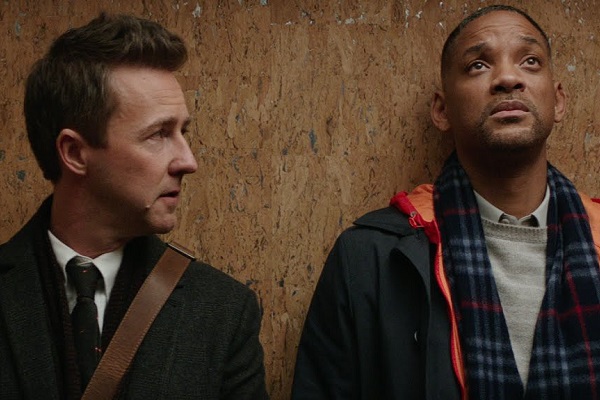 
This drama directed by David Frankel has a stellar cast headed by Will Smith.  Smith plays Howard, a dynamic advertising man, who experiences a devastating loss in his life.

In the opening, Howard is the driving force behind his new company that he's started with a friend, Whit (Edward Norton).  He's on top of the world, but then his six year old daughter dies, and Howard totally shuts down.  His marriage falls apart, and he loses all interest in everything he had once cared about, including his business.

The story (script by Allan Loeb) picks up a couple of years later, and the company is on the verge of financial ruin.  Howard bikes into work every day, but he spends his time setting up elaborate domino patterns and has no interaction with any co-workers.  He lives in a dark little apartment and has almost no communication with anyone.  He does have a lot of pent up anger, and one way that he deals with it, is by writing letters to "Time". "Death" and "Love"  to call out these three concepts.

Whit and two of the other executives and friends in the company, Claire (Kate Winslet) and Simon (Michael Pena) have been patient with Howard, but experiencing financial problems themselves, they come up with an unsavory plan  which would result in having. his majority voting stock transferred to Whit.

The film is certainly a tearjerker and I must admit that there is heavy duty manipulation going on, however, it had some very moving scenes that didn't seem forced and there was really good acting by Mirren, Smith and Naomi Harris as a grief counselor.