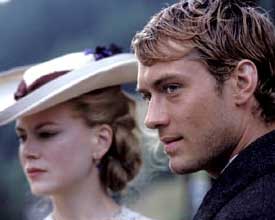 Cold Mountain deals with the terror of war both on troops and the people who remain behind who are in danger of the enemy passing through to conquer and loot. But In Cold Mountain, North Carolina the local rogue enforcers cause more anxiety than the war.

Director, Anthony Minghella (The English Patient) opens on a scared rabbit running through a fox-hole filled with confederate soldiers. As the troops chase a potential meal the trench explodes spraying men in all directions. Inman (Jude Law -AI) is buried in mud and as he drags himself out from the siege of Petersberg he decides to heads home. He has developed a far different attitude toward the war than existed among the young men in Cold Mountain when they cheered at the beginning "We got out war."

With flashbacks to her arrival Ada Monroe (Nicole Kidman) is introduced as one of the women who remain in Cold Mountain attempting to survive after her father's death. She is joined by Ruby Thewes (Renee Zellweger) a drifter of a mountain woman who knows the ropes and can get the farm back on track working with Ada. It's Ruby who simplifies the meaning of war by stating: They create the clouds and then curse the rain.

Inman's journey back home is filled with pain, he has a serious neck wound and flies buzz around him in the military hospital. It's the picture of Ada that keeps him determined to find his way back to Cold Mountain. Along the way he runs in to Philip Seymour Hoffman an outspoken reverend who has Elmer Gantry ideas, a goat keeper and a frightened young woman Natalie Portman who asks for comfort just before federal raiders brutally attack her and her baby.

There is a dark feel to Cold Mountain, the hell of war constantly permeates the screen. It's the dark menace that rips at people and tears their emotions apart. Director Minghella holds our feet to the fire as we watch their plight and share their hopes. If there is a problem with the film, Nicole Kidman looks stunning even when her hair is messed a little after working on the property all day. Even Scarlet O'Hara was a bit haggard after the war.

Jude Law on the other hand demands our allegiance he is totally convincing as a rural man with only the hope of seeing Ada again to carry him across country wounded and threatened constantly. Zellweger has the kind of part that supporting actors get awards from.

This is a film with the power to make us think about the costs of war on the folks in the path of destruction and the troops who must fight and in some cases perpetuate cruelties on the people of the land. It's images will hold in your mind long after the closing credits.