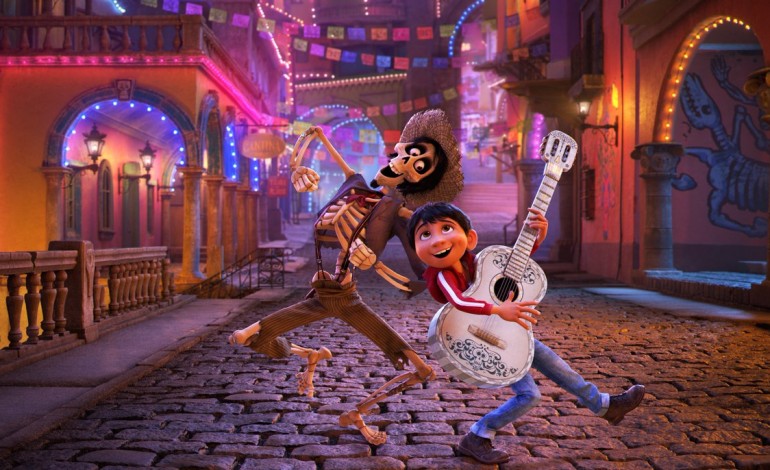 
Coco follows the story of Miguel (Anthony Gonzalez) a young musician who has the unfortunate luck of living in a family that has a tradition of banning music.  However, when he discovers that one of his long dead relatives was a musician as well he finds himself, through a bizarre event, trapped in the land of the dead where he must find his ancestor and receive his blessing to return home and be the musician he always wanted to be.

There have been many films, including animated, that have dealt with not only going to the land of the dead, but also having the time take place during the day of the dead festival.  In many ways it is a popular trope to come from making films based of Mexican culture.  However, the film itself does its best to stand out from these films.  And it truly succeeded in this.  To start of the visuals in this film are breathtaking.  The land of the dead is vibrant and full of life with details around every corner.  From the moment you first see it you are entranced by it.  The film also does a very good job at making this world feel believable without having to go into too much detail about how it functions which I thought was very impressive.  Next up is the music.  While most of the soundtrack is underplayed the songs written for the film really stand out and are fantastic to listen to.  This is extremely important as the film from the very beginning stresses the importance of music and the musicians that play it, and it really does make the film better for it.  Finally I want to talk about the plot of the film.  While I did find most of the story to be pretty run-of-the-mill, I did find the story by the second half to be pretty engaging.  The struggles that Miguel has to go through trying to become a musician and living his dream makes him very relatable even if his character is nothing new.

If I were to complain though I would say that the first half of the film dragged it down a bit.  It was filled with some pretty eye rolling cliches that really had me doubting whether or not I was going to enjoy the film.  However, despite the stumble at the beginning the film does a good job picking up its pace and by the end of the film left me feeling completely satisfied with what I had viewed.

So in the end, Coco is an excellent film with some stunning visuals and excellent music to go with it.  Even though the story starts off a bit rough it smooths itself out and by the end delivers a solid film.  I believe it's worth seeing in theaters if given the chance.