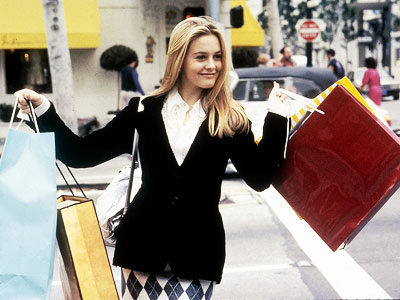 
Far from what I expected, this is a bright, clever, funny comedy about the love trials of teenager Cher (Alicia Silverstone).

Cher is Beverly Hills rich. Her father is a lawyer and a very successful one. Her mother died recently from complications of liposuction. Her mission is life is to help others get together and find relationships. She helps two of her teachers (played by Wallace Shawn and Twink Caplan) discover each other and she is determined to do a makeover of the new kid in town, Tai (Brittany Murphy). She has little use for boys who wear their pants baggy and too low and for girls who just don't dress right. In contrast to some other films about similar matters, her concern is more that of a do-gooder. She enjoys her self-appointed role as the match maker at school.

Writer/director Amy Heckerling fills the script with enough chuckles to keep the audience giggling all the way through. The greatest insult hurled at Cher comes from Tai when, in a fit of anger, she says, "You're a virgin and you can drive a car." It crushes poor Cher. When asked if she likes Billy Holliday, Cher response "I Love HIM." While on a date with Christian (Justin Walker), her first real love, she speaks of the Tony Curtis film "Spo rat a kiss" which they watch together. Spartacus is what she is referring to.

With a solid supporting cast concluding Dan Hedaya as the stern money making, but concerned proud father and Stacey Dash as Dionne, the best friend. Clueless, which means lost, stupid or mental state of people who aren't your friends, is an enjoyable trip thorough two weeks in the life of a Bet-ty (a female Babe) who is looking for a Bald-win (an attractive guy - a male Bet-ty) not a Bar-ney (an unattractive guy - not a Bald-win).

Clueless has all the clues for a laugh filled evening.