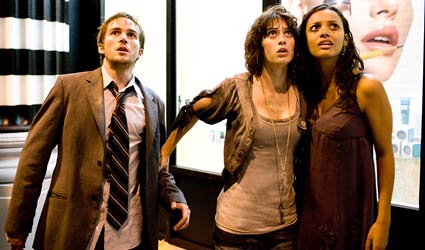 
It's hard to make a hand-held screen extravaganza if evidenced by the mysterious, dislocating Cloverfield.

The opening has a title card that leads into a video from a camcorder dated April 27th.

The real-time experience, then, is captured roughly over a night that occurs about a month later with flashbacks to earlier interactions that center around a twenty-something New Yorker, Rob (Michael Stahl-David).

His friends, who include Lily (Jessica Lucas), Hud (T.J. Miller), as well as brother Jason (Mike Vogel), are throwing Rob a surprise party as he has landed a new business opportunity in Japan.

Also, at the party, where some of the conflict between the characters is felt, is Beth (Odette Yustman), Rob's old flame, and a friend of a friend, Marlena (Lizzy Caplan).

Under the direction of Jason, Hud operates the camcorder which basically is the representation of "Cloverfield", which may be a code name for a secret government project.

The hype around the movie which seems like a filtration of Godzilla and I Am Legend through The Blair Witch Project hits suddenly like a sneak attack on Lower Manhattan. The Statue of Liberty head rolls down a major avenue and leaves all in a panic and emergency medical services personnel in high demand.

Soon, after Rob and Beth part on unpleasant terms, disaster strikes and the group gets split up as special effects set up an unnerving tone. Director Matt Reeves stages many sequences in a way that may have some reaching for their headache tablets, but the point probably is to put the viewer in the moment.

Cloverfield has its skyscraper-like behemoth, but there are other "spawn" that may provide chilling moments, especially down in the bowels of the transit system, among the rats. The green, night vision of the camcorder is used for the requisite effect, as the "idiot" plot is formulated all the way through Rob's newly battery-powered cell phone to reach Beth's plundered high-rise apartment.

Given the horrific, not so bloody mayhem, the filmmakers impose a sense of acting in the heat of the moment. Still, the story and acting is noticeably amateurish, even presumably long before a writer's work stoppage. Only Caplan has some presence and some of the wit and appearance of Zooey Deschanel. Ultimately, as this Blair Witch goes Ground Zero in an elongated running time less than many animated features, the documentary realism of visual conceit leaves more than Hud with a thud.