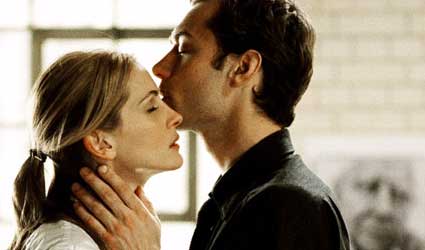 Director Mike Nichols has his way with vicious tensions from chance relationships in Closer, the antecedent being Patrick Marbers London-based play which reached Broadway in 1999.

The gradual often cold-hearted parallelogram that entails much jealousy and guilt along with casual wit and eroticism has a confident Nichols orchestrating it all with a cruel foursome played by Julia Roberts, Jude Law, Natalie Portman and Clive Owen.

Contemporary London has a pristine, chilly feel to it from the lensing and designing of lofts, galleries, and photo studios. It extends to each of the characters, Roberts is Anna, a photographer, Law is Dan an obit writer (the Siberia of journalism) trying to become a novelist, Portman is Alice, a stripper in chic gentleman clubs who also waitresses for a time and Owen is Larry, Annas urbane dermatologist husband.

Swift editing is important as Nichols tracks the time line of how each of the relationships come and go working persuasively from Marbers caustic dialogue in his adaptation from the state. Skipping around in chronology, the sex (happening off screen) lies, and deceit of two couples, Dan and Alice and Anna and Larry come forth with a raw, penetrating intensity.

While the salacious, unsavory intimacy may not match a younger Nichols when he worked with the likes of Elizabeth Taylor and Jack Nicholson, there are plenty of human trip wires from the opening line of Hello stranger. There will be flirtations and the aura of sexual intrigue right after a taxi hits Allice, a novice as to how cars are driven on London streets. A dirge-like song that bookends Closer also touches in light of an early visit to a park by Alice and Dan which displays the name of those who were more than good Samaritans.

The realization of Dans dream which reflects where Alice has come from as a stripper in New York will lead to Larry harshly confronting his wife about her decision to break off their relationship. About Dan, Anna says, hes gentler and sweeter, and not just tin the romantic scheme of things. Some viewers will find the nastiness going on a bit depressing, but Nichols has a haunting way to locate a vulnerable bond that exists between people who have crass, disarming tendencies. He creates a dynamic that shares tensions of emotional aggression.

Wouldnt you know, a picture of Alice, a sneaky on-line correspondence by Dan, and Annas photography exhibition (see a wistful, alluring Alice) will add to some of the startling complexities over a four year span. Roberts goes deeper than in most of her roles as a woman clinging to the truth, while Owen bruises like a fist wrapped in blood with brute rage in getting to Dan through Alice who is disgraced but wont buckle into his needs. And, Portman (Garden State) makes Alice the most sympathetic in holding more than her own with her more seasoned counterparts. She ignites something in Alices dealing with her pain, not actually turned on by all the unscrupulousness between the couples, in an understated, affecting way.

The destruction of love can leave one numb, and Nichols and his up to the challenge ensemble have what it takes to find the painful details within the icy sexual escapades that even offers a redemptive twist not seen on stage. Through precision into ruthlessness and betrayal, Marbers play has something loftier to it when exploring the darker aspects of sex and honesty.

Back to Home Page