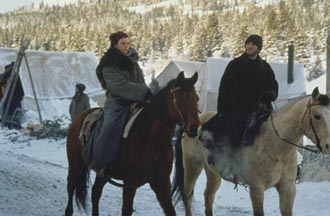 The Claim is Michael Winterbottom's return to the historical front as it positions the famous Thomas hardy novel, The Mayor of Casterbridge back nearly a score to the post gold rush year of 1867 in the Sierra Nevada.

The ambitious task of tracking Hardy is one that Winterbottom doesn't excel well at considering recent works of contemporary life like the more coherent Wonderland. The Claim has veteran actress Nastassja Kinski who starred in the most penetrating film realized from Hardy, Roman Polanski's Tess.

Revolving around five principal characters, The Claim is propelled by Peter Mullan's tough Irish settler Dillon, who has accrued much wealth from his gold digging days.  The patriarch in charge of mining the town, Kingdom Come.  Not just an owner of the mines, he runs just about every business, including the liquor store.  He's even having an affair with a cabaret singer of Portuguese decent Milla Joyavich's Lucia, who presides over a whorehouse.

Three others make their way into Kingdom Come which will change things for the town and Dillon.  Wes Bentley (American Beauty) is the suave surveyor who has big plans for the Central Pacific Railroad and Kinski's pallid Elena and daughter Hope, Sarah Polly (Go) are Polish immigrants who are vital to Dillon's past.

Flashbacks are often inserted to establish the relationships necessary to give meaning to the epic-like Western that naturalistically plods and doesn't have the nuances of the denizens of Casterbridge and how they talk.

This wintry tale comments on the effects of Manifest Destiny with the conflict between cultural change and technology, but The Claim appears divided between a poetic indoor feeling and its starkly grand landscapes accentuated by lenser Alwin Kuchler.

A new way of how the west was won is depicted in The Claim reflecting a period of transition and ethnicity.  But characters, besides Mullan's troubled, but determined pioneering fellow, aren't explored at all.

The Claim lays its tracks of greed, revenge, and love in a way that muddles the beauty of the western frontier though Mullan ruggedly distinguishes himself as a worthy Hardy protagonist.