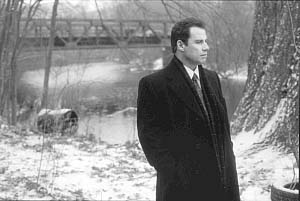 John Travolta and Robert Duvall star in A Civil Action based on the best selling book by Northampton, Massachusetts  resident Jonathan Harr.  It tells the real-life story of personal injury attorney Jan Schlichtmann (Travolta) and his experience representing eight Woburn, Massachusetts families against two of the nation's largest corporations - W.R. Grace and Co. and Beatrice Foods.

The families claimed that the companies contaminated their town's drinking water with chemical waste leading to the leukemia deaths of their children.

When Harr decided to write A Civil Action more than a decade ago, Schlichtmann was immersed in a string of successful multi-million dollar personal injury verdicts and felt he had the proof needed to win the Woburn case.  The book was intended to detail one more grand victory.  Instead, the case lead Schlichtmann down a road of professional and emotional destruction and left Harr feeling, in his own words, as if I was "watching a man travel to the brink of insanity."

Indeed, it was a difficult case to prove.  Schlichtmann had to show that the companies dumped toxic solvents on the ground, which entered the drinking water by seeping into the town wells, resulting in fatal illnesses.  Schlichtmann financed the case himself, spending more than $2.6 million dollars on medical and scientific tests.

In the words of Schlichtmann, "This case tested all who came in contact with it.  It forced people to reveal what was important to them, how much they cared about truth and how willing they were to perpetuate lies."  Personally, Schlichtmann lost everything - his home, his practice and his friends - in his defense of the truth.

Academy Award-winning screenwriter Steven Zaillian (Schindler's List) directed A Civil Action and wrote the screenplay.  There are some parallels to be drawn between the characters of Schindler and Schlichtmann - both having greeted the misfortunes of others initially as an opportunity - only to be completed transformed by the experience.  As Zaillian puts it, "Jan is certainly imperfect.  He is someone primarily motivated by money, by the things one accumulates in life, and that is how he defines himself.  But ultimately he is willing to be destroyed by what he feels in right."

John Travolta shines in his role.  The story is worth seeing - and additionally for the film's excellent setting throughout New England - Boston, Brimfield, Charlestown, Dedham, Northbridge, Palmer and Waltham Massachusetts.

It is rated PG-13 for mild violence.