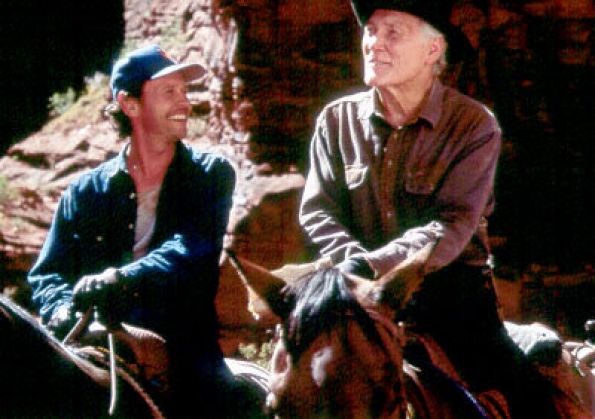 
Making a sequel to a very successful comedy must be a difficult undertaking. You want to give the audience the same fun they experienced the first time around, yet add something new.

Writers Lowell Ganz, Babaloo Mandel and Billy Crystal have some luck with the fun, but the story takes too long to get started.

Mitch finds a treasure map hidden in the lining of Curly's hat. As you may recall, Jack Palance won an Academy Award for his portrayal of Curly, the grizzled trail blazer, who died in the first film. He returns here as Duke, Curly's twin brother, a retired sailor who makes his living dressing up as a pirate and greeting diners at a seafood restaurant.

Mitch, Phil, Mitch's lover brother Glen (Jon Lovitz) and Duke join forces to head out to Nevada to look for the gold bars, supposedly hidden in the desert after a train robbery. The trouble is, it takes at least half of the movie before these guys begin their adventure.

The four excited novices rent horses and comping equipment to begin their search, but they run into some trouble along the way, such as stampeding wild horses, freezing nights and bad guys trying to steal their map.

Crystal, Lovitz and Stern are very likable actors but, once again, Palance steals the show. He's so gritty, you expect to see specks of dirt falling from him while he walks. He has a wonderful time with this character.

Crystal makes a valiant stab at recapturing the exuberance of his first cowboy outing but he just gets too late a start.