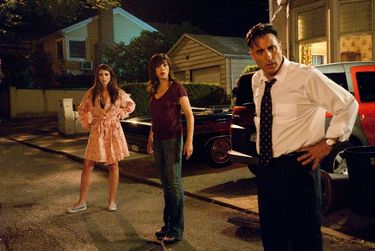 
This independent comedy does its utmost from furtive deceptions in a dysfunctional Bronx family.

City Island stars Andy Garcia, Julianna Margulies, Emily Mortimer, and Alan Arkin, and is a one-mile stretch of a quaint fishing community on the borough's outskirts.

Garcia excels in the role of patriarch Vince Rizzo, a family man of a corrections officer who has some major skeletons in his closet.

The first being good-looking 20-ish Tony (Steven Strait), a prisoner he brings to do some home restoration, who happens to be the son of a now deceased woman he once courted.

Margulies's loquacious Joyce is Vince's long-suffering missus, unbeknowst of his wanting to be an actor, as well as another closeted habit. Vince keeps a motivational "An Actor Prepares" hidden in the bathroom.

Daughter Vivian (Garcia's actual daughter Dominik Garcia-Lorido) hasn't told her parents that she's been kicked out of college and is now working as an exotic dancer with new breast implants. Wise-cracking teen son Vinnie (Ezra Miller) has something for obese women like a 350-lb neighbor.

Raymond De Felitta captures the working-class aura and tensions of a working-class Italian-American family and provides the kind of lively environment that his actors, especially Garcia, truly embrace. Not unlike his affecting, wry, and rather astute Two Family House from a decade ago.

The secrets and vices of those not so innocent and a bit frustrated is effectively drawn out by a writer-director who makes the most out of misinterpretation to much comedic effect. Garcia is able to bring more nuance in a more patient handling of a character who is really appealing when getting an audition for a (Martin Scorsese) film. Margulies is formidable opposite Garcia in contrast to her chic upper-middle class legal eagle on TV in "The Good Wife". And, in a film that is more upbeat and almost as resonant as something like Little Miss Sunshine, Arkin is funny as a curmudgeon drama coach who opines about "method acting" and Mortimer piquant as an acting partner with a family upstate.