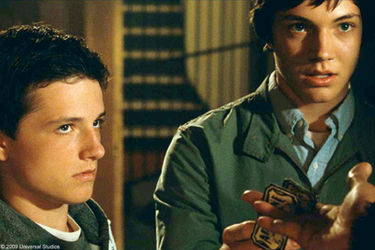 
Paul Weitz, brother of Chris, takes a bite out of the vampire genre with Cirque Du Freak: The Vampire's Assistant. Well, many more than one as a hodgepodge seems to have been rushed to get in cineplexes a month before Twilight Saga: The New Moon does its brinks job on its massive tweener demographic. It stars John C. Reilly, Chris Massoglia, and Josh Hutcherson.

The script by Weitz and Brian Helgeland is on another popular series of books, this time by Darren Shan. The fantasy/adventure, among other things like camraderie, coming-of-age, scary horror, or freakish circus tale, centers on a teenager, Darren (Massoglia), who happens to fracture a two-centuries truce between two warring factions of vampires. In saving his best friend with "bad blood" (Hutcherson), Darren is drawn into a fantastic life of misunderstoond sideshow freaks and grotesque creatures of the night. This nebbish teen disappears from the safety of a boring existence to fulfill a destiny made from nightmares.

Sounds all well and good, yet the film is hardly as interesting as the first-person antecedent which made for some wicked, dark fun. It's got some thematic potential and Reilly looks to be well-cast as the 220-year old, slow-aging (Count) Larten Crepsley who reluctantly takes Darren under his wing. But, even the versatile character actor (going against type) is as featureless and uninspiring as the movie itself which has Freudian overtones.

Weitz and Helgeland struggle to instill the notion of trust on the part of Darren as the Cirque and Crepsley become his new family. Like The Golden Compass directed by brother Chris, this structurally unsound feature seems like the overlong, overpacked trailer for a bigger-budgeted picture. The handling of characters, including their appearances and disappearances, almost is as sloppy as the editing with some scene changes abrupt to say the least. So, it's hard to take the psychology and motivation of the many, especially key players, very seriously, thus abating the dramatic potential of simmering teen angst and eerie nocturnal stuff.

It must be said, however, that Weitz and his casting personnel have retained a laudable ensemble for something that may give ardent fans of the series bloodlust. Ken Watanable appears as a gigantic barker, Mr. Tall, while Patrick Fugit makes the most of a dull snake-boy and there's some vivaciousness from Salma Hayek as bearded lady Madame Truska.

But, the kind of attention, approach and indecisiveness on the subject leaves The Vampire's Assistant too freaky for its own good. While the odd mix of CGI and visuals have the making of a cheesy, sinewy B-movie, just like the unusual friendship of Darren and Larten, this is more of a misguided monstrosity than fangy magic.