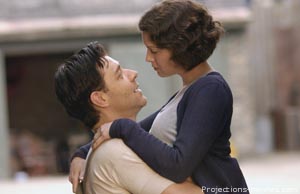 
Ron Howard continues on the path of quality directing with Cinderella Man, a production that is filled with boxing scenes that are some of the best on film. But Howard's Cinderella Man toils in the world of the human sprit during the great depression of the thirties in which boxer Jim Braddock, a once-promising light heavyweight boxer, is forced back into the ring as his only remaining option to support his family.

Russell Crowe's fine performance as Braddock impresses as he imparts the boxer's determination to support his family and keep them together. At times kids were split up during the depression when parents just could not provide the necessities of life for them. Renee Zellweger, Braddock's wife, Mae sells whatever she can to get money and waters down the milk when the milk man won't give credit any more. Electricity is shut off and the family is forced to do, as in Doctor Ziavago, steal wood from an advertising sign to burn in the apartment stove.

Howard emotionally brings us to a time before social security and the security net when families lived in Hoovervills (named after President Hoover); in Cinderella Man New York's Central Park is the location. As a strong man he is opposed to going on relief but in a scene that is wrenching through Crowe's performance he eventually is forced to accept public aid. He also must humble himself and beg for money from the boxing elite to pay his bills and keep his family together. These two scenes are at the heart of the background in which Braddock returns to the boxing world.

His pride and dignity and rational behavior bring hope to those who are also struggling to survive - particularly his fellow Irish neighbors who fight for a day of work on the docks.

Initially the screenplay by Akiva Goldsman emits the feeling of The Grapes of Wrath which was nominated for best picture in 1940. It then moves to an underdog film as Braddock returns to the ring for a $250 purse fully expecting to be beaten up for the pay day which can get him out of debt. His manager played with realistic award winning enthusiasm by Paul Giamatti, begins to secure more and more fights and Braddock not so much with skill, but determination becomes a winner.

As an icon for those suffering through the depression he becomes a symbol of hope and success, eventually fighting Max Baer (Craig Bierko) for the world heavy weight boxing championship, with everyone listening on the radio and Zellweger effecting us most as she listened reluctantly to the very physically punishing fight.

With wonderful performances and the gentle hand of Howard the spark of hope and strength stands through as it keeps the Braddocks going even when we are looking at the bottom with little to hold on to. He creates a real hero who returns the aid he was given when in need, stays in his community, commits to his family and never gives up.

Hooray to Ron Howard for bringing this world to us in a gripping effective manner.