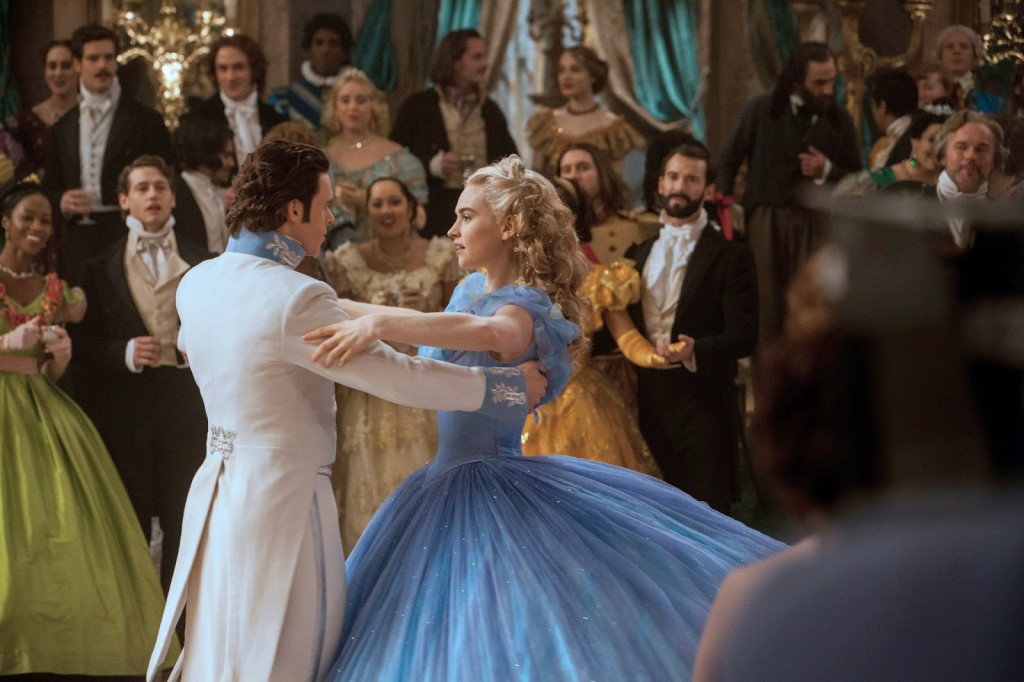 
Director Kenneth Branagh brings a story which has been on the screen many times in the past.  What is important in this production is that he presents the fable with a new beauty that is filled with mixed live and animated (special effects) scenes which continue the magic of the prince and the pauper girl finding true love with each other.  Branagh makes us believe again.

The effects are impressive when the pumpkin explodes inside a greenhouse and morphs into a stunning golden carriage and even more impressive is the creation of Cinderella's gown which appears to be the spinning of pink and blue candy cotton falling together.

Taking a line from The American President as the couple dances she asks, how he can accept everyone looking at him and he replies "they are looking at you."

The musical score is effective but I miss the introductory song "Ten Minutes Ago," from the minds of Rogers and Hammerstein in the stage and TV productions.  The mice here are cute but can't stand up to Jaques and Gus Gus as the mice in the 1950 animated feature.  But Branagh weaves in blue birds, lizards, a goose and of course four mice to pull the carriage.

Lily James as Cinderella delights both adults and kids as an innocent and straight forward young woman who accepts her place in life after loosing her parents.  Her father is played by Ben Chapin and that adds some film history magic. Cate Blanchett gets top billing and is a wonderful step mother with all the blemishes, but who wants to be known as that.  The daughters Drisella (Sophie McShera) and Anastasia (Holliday Granger) are a little silly at times but fit well into their characters as limited offspring of Lady Tremaine (Blanchette).

Even following a long list of productions of the same name, this film is a delight to watch.

Perhaps we all love those special weddings and who hasn't followed the love affair and wedding of the Prince in England.  Here Branagh makes it even more romantic and all the accessories are beautiful to watch.

Once upon a time like this will always be in style.