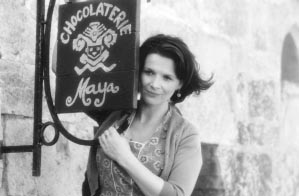 Chocolat is a delight.

Juliette Binoche's Vianne and her daughter Anouk (Victoire Thivisol) come into the small French town of Lansquenet just as Lent begins.  With their red hooded capes blowing in the North wind, we learn it is their tradition handed down from Vianne's mother, to move from town to town bringing change through chocolate, a mystic kangaroo and adjustments in the static life styles of the town.

Committed to holding the traditions, Comte De Reynaud (Alfred Molina) leads the town and the church congregation both in prayer and retaining the standards, particularly those revolving around limited eating during lent.  Vianne's chocolate tests the Comte's power to control.  While he is sincerely committed, he hides the reasons for his wife's extended vacation from him and ignores the obvious interest his secretary, Caroline Clairmont (Carrie-Anne Moss) has in him.  Caroline, in keeping with the static rules, refuses to allow her son to see his grandmother, Judi Dench's Armande, who feasts on chocolate despite her diabetes.

Leslie Caron's Madame Audel, who continues to morn her husband who was killed in World War I, and Lena Olin's Josephine Muscat, an abused wife, round out the local town cast.  Johnny Depp's Roux leads a group of gypsies who anchor at the town dock creating another challenge for Comte De Reynaud while creating a lover for Vianne.

Vianne's manner and the healing power created by the chocolate slowly begin a revolutionary change in the town.  Madame Audel receives a secret gift from the chocolaterie; Josephine renounces her husband and moves in with Vianne and her daughter.  An estranged couple learn again about love making; the young priest with bright blue eyes begins to see good in the change and the limits of the definition of mortal sin, while recognizing love and happiness are not an affront to God.

In a series of scenes at the climax, we see the beauty of the gypsies' boats at night, a birthday party for the grandmother which her grandson attends secretly and Vianne's difficult decision concerning moving on with the North wind.

Chocolat, under the guidance of a confident performance by Juliette Binoche, gently breaths fresh ideas into Lansquenet.  It is a poem and fantasy that reaches not only for the intoxicating taste of chocolate but the feelings of love and affection which are released from the stilled hearts of the folks of Lansquenet.