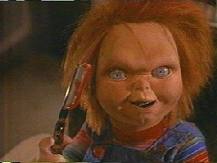 
Chucky, that evil wooden doll who came to life after a killer's spirit entered its body, has returned for his third outing.

The little boy that Chucky terrorized in the 1988 original Child's Play is now grown into a teenager, played by Justin Whalin. After years of foster homes, he ends up in a military school filled with bullies and delinquents -- a fertile ground for Chucky to find a body to take over.

Chucky, whose voice is again supplied by Brad Dourif (Exorcist III and Nightmare on Elm Street), is as nasty as ever. The novelty of the sweet-looking, freckle-faced doll whose little legs scurried across the screen to do bodily harm, has grown tiresome.