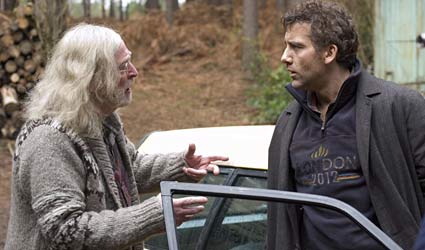 
The futuristic P.D. James novel Children of Men is translated to the screen with skill and visual alacrity by Alfonso Cuaron (Y Tu Mama Tambien, Harry Potter and the Prisoner of Azkaban).

A science-fiction thriller is set in 2027 London when humans are no longer able to procreate. Paranoia is felt about illegals entering the chaotic metropolis.

Clive Owen is Theo, a burned-out, heavy-drinking bureaucrat, who reconnects with an old flame (Julianne Moore), part of an underground movement. She urges him to assist the young, black Kee (Claire-Hope Ashitey). Kee happens to be the first pregnant woman on earth in about 20 years.

The screenplay collaborated on by Cuaron and four others puts Theo and Kee on a turbulent trek. With everyone they meet, including friends, strangers, and activists, it's hard for them to be sure who's on their side.

A raw, impassioned approach by the director brings detail, technology, and grime to London makes the swiftly paced tale work within the effects of infertility on society.

The cast is capable of immersing the viewer into the gripping events. Owen (Closer, Inside Man) rises to the occasion as the reluctant hero calling on all of his emotional and physical reserves. Moore (Freedomland, The Hours) exhibits strength as the woman in Theo's past who has a wry streak though she doesn't seem to connect satisfyingly with Owen on screen. In fewer scenes Michael Caine shines as Jasper, an old pal of a political cartoonist who grows marijuana, a hippie hermit, Peter Mullan is a crazed, officous military man, and Charlie Hunnam and Chiwetel Ejiofor are effective as the unrelenting rebels.

Cuaron works with his filmmakers in ways that bring much versimilitude to a war-like setting. The photography is exhilirating throughout and some settings and the script are lined with amusing touches. Yes, the screenplay lacks the historical context or continuity of a V for Vendetta, and one may be guessing about how London as a peace center came to be, as well as the global infertility.

But, if the sketchy dystopian sci-fi wanes in favor of more exciting, involving action (reminiscient at times of a Black Hawk Down), scenes and dialogue can suddenly throw one for a loop allowing Children of Men to resonate hauntingly with a new hope.