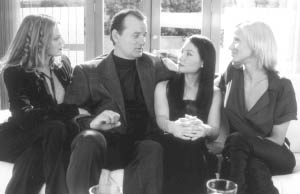 The Tounsend Detective Agency still has the voice of John Forsythe as "Charlie".  Bosley, the trusted right hand man, is played by Bill Murray - I would like to have seen him in a larger role.

The Angels might have some of the same sexy moves as their TV counterparts, however they play different characters.  Cameron Diaz, who shows a great deal of comic talent, plays Natalie, a lanky blond who loves to dance; Drew Barrymore plays read headed Dylan, a woman with a child like quality; and Lucy Liu plays dark haired Alex, an exotic take charge beauty.

The woman are proficient in kick boxing gymnastics, car racing and electronics and the action is fast and furious as they use all of these qualities in their crime fighting.  The sound track, featuring the group Destiny's Child is just right, each Matrix like kick, flip, somersault or smack is punctuated with a great beat.

The story has the Angels investigating the kidnaping of a techno wizard and his audio DNA invention, but that's secondary to the important part, which is: what are the Angels wearing?

The women dress provocatively, in fact they wear so much black leather, they look like they're at a biker's convention.  Using their sexuality they distract men to gain information, but it is not distasteful because it's done with verve and comedy.

Once one of the Angels get in trouble, they call each other, not men, for help.  They don't play damsels in distress, but strong, reliable women.

The actresses also appear to be having a lot of fun with their characters.  They can be ditzy or clumsy, or gullible, but they are always sexy.

Don't expect to have a meaningful experience, just have a great time.