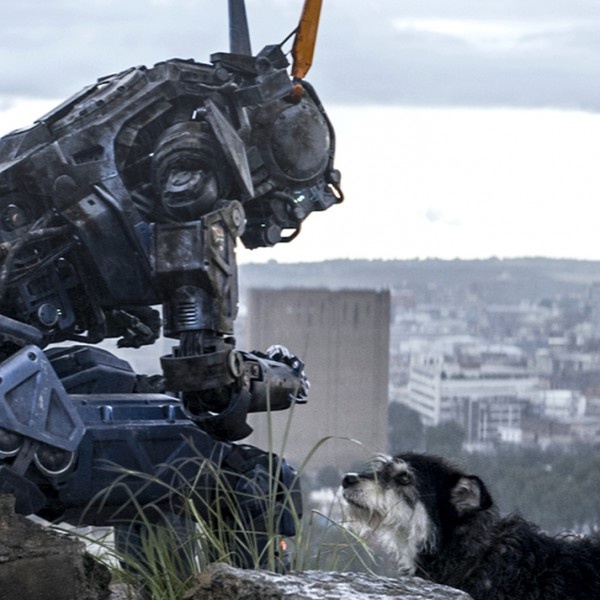 
A usually untraditionally thoughtful Neill Blomkamp is being considered to resuscitate the Alien franchise but not before Sigourney Weaver (Exodus: Gods & Kings) co-stars in a wan, politically tinged science-fiction drama about an intelligent robot that's kidnapped into a gangsta clan with his captors.

Chappie also features Dev Patel (currently in the stock, yet open-hearted The Second Best Exotic Marigold Hotel) , Hugh Jackman (X-Men: Days of Future Past), and Blomkamp regular Sharlto Copley (of Malificient whose eponymous character is CGI grafted over but doesn't make for an encouraging role or interesting interplay with those around him).

The Johannesburg setting looks to have some striking physicality and logistics for a smart, complex premise to entertain with darker and lighter elements expressed in the film's advertising. But, what could have been an original modern variant
'80s films like Robocop and Short Circuit proves to be perfunctory, routine, and haggard, notably in its overall visual representation.

Patel is nerdy upright local authority artificial engineer Deon who relates one of his mechanical crime officials to be sentient, of the human variety. It doesn't go well with Jackman's staunch engineer, Vincent, who thinks it should be of the soldierly ilk which has reduced the bloodshed in the metropolis. The "Moose" is his latest larger invention to deal with wrongdoings, but doesn't sit well with Weaver's overseer Michelle. Though it's certain it'll figure in the pat, forced final showdown.

Deon has started to bring his own personal touch and guidance to a new feeling being when it's snatched by inane, lanky Ninja and ruffian, though protectively affectionate Yo-Landi (Ninja and Yo-Landi Visser of new wave hip-hop band Die Antwoord), as well as more 'normal' sidekick Yankie (Jose Pablo Cantillo). These new beholden criminal guardians threaten their newly decorated accomplice whom they've imparted a nasty, if hip makeover (that elicits some guffaws), but Chappie soon becomes more dispiriting and degrading in the process, especially after a heated encounter between Vincent and Deon and the latter's denunciation of Ninja.

It's hard to blame Copley, but in the mind-set of Blomkamp and writing partner Terri Tatchell the limited visage and vocal expression are too disagreeable and overwrought to offer any palpable engaging presence. And, in a mostly half-baked, junky Chappie Visser is really the lone (viable) survivor of many deficiencies and disputatiousness with surprising endurance considering the military puissance on hand.