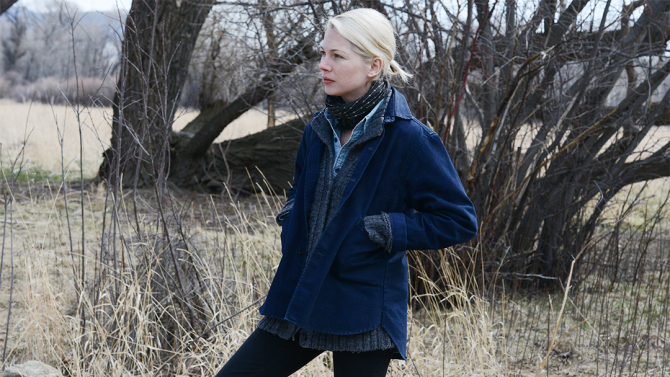 
Kelly Reichardt (Night Moves, Meek's Cutoff) continues to avoid the mainstream with her telling, if not always congruous Certain Women.

Starring her muse Michelle Williams, as well other talents like Kristen Stewart and Laura Dern, a triptych gradually develops from nature and a type of internal bond with an affection for the distaff. Maybe a little like Rebecca Miller's 2002 Personal Velocity but on the quieter, more rustic side.

Shifting eastward from the Pacific Northwest, the quaint Livingston, Montana where the plains meet the Rockies, character examinations are drawn by the understated, naturalistic auteur who resonantly strokes a hankering for these diverse women. Using the short stories by acclaimed novelist Maile Meloy there's even an affecting connection not just between people, but beloved animals, including a Corgi.

Dern's Laura is a lawyer dealing with a flustered, desperate disable client (Jared Harris) in the more droll segment where the pragmatic lady can only hold out so long for him. The next tale has a connection to the first through the tactless husband (James LeGros) of Williams's spiky mother Gina trying to secure sandstone for their prospective residence. Dealing with an elderly gentlemen (remembered from a small-screen comedy, a spin-off of Soap) to accomplish this helps earn it a certain éclat.

The final, longest and most involving vignette sets up the milieu of an isolated horse trainer Jamie (a surprising Lily Gladstone) who begins attending out of the blue education law classes run by recent law school grad Beth Travis (Stewart) for professors. Finally, each is resolved in either bittersweet, longing, or optimistic ways.

The filmmaking and writing in its spare, if languid approach allows the outside with its wide open plains and inside, especially through its performers (albeit Williams probably has the more underwritten role) to unite with a Thoreau-like veracity. Certain Women may not capture the hearts and minds of viewers looking for high drama, but it casts an elaborately effective, hardly hackneyed aura which makes for ideal art-house fare.