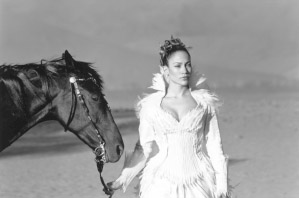 In a world that resembles a surrealistic Silence of the Lambs, Catherine Deane (Jennifer Lopez) reaches for a young woman locked in a lethal water cell.

Filled with stunning, confusing and bizarre images, The Cell is a visual feast by Kevin Tod Haug which matches the dazzling nightmarish script by Mark Protosevich.

Director Tarsem Singh molds this take off on a science fiction principal and brings us to new horizons inside the dark mind of a serial killer.  What sets The Cell apart from others is the riveting mind trip, the imagination in the sets, costumes and special effects and very careful attention to detail.  Singh never insults or cheats.  The last victim kidnaped is cautious: she has an electric prod to protect herself, she is not just overpowered (which would be the easy way), she is tricked by an albino dog in a very interesting scene.

The opening brings us to a red sand desert where Lopez's Catherine is riding a black horse.  As she dismounts, the horse becomes a statue and she walks along the top of the dunes between the red sand and a black shadow.  When she reaches flat ground the wind blows her extravagant white dress and she attempts to speak with a young boy, Edward Baines (Colton James).  Suddenly, we learn she is in a blue laboratory inside a fitted maroon suit, horizontally suspended by cables as victims were in Coma, and under the control of Dr. Miriam Kent (Marianna Jean-Baptiste - Secrets & Lies).  Catherine is a dedicated social worker and researcher, committed to helping the boy move out from his psychological shell.  That commitment will seriously challenge her when she uses her new transcendental science to trip into the mind of Carl Stargher (Vincent D'Onofrio), a serial killer.

FBI agent Peter Novak (Vince Vaughn - Clay Pigeons), approaches Catherine to enter the mind of the killer while he lies in a fatal coma.  He needs to learn the location of his last victim who is held in a water cell which will automatically flood in a short time.

Catherine's trip in the bizarre killer's mind leads her to monstrous images and thoughts that Catherine may not be able to escape with her sanity intact.  Beyond that she finds two different paths to follow in the killer's memory; one which is compelling for her.

The Cell is a special film.  It is presented with unique imagination and great beauty even in its brutality.  It also brings us full circle.  Catherine, in the end, is back in the desert with new means to solve the original problem young Edward faces.