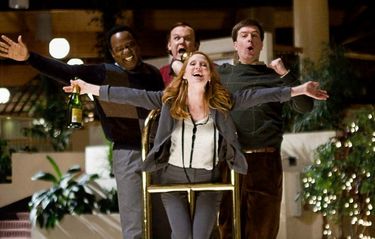 
Before he's seen reprising his role Stu in The Hangover Part II, Ed Helms (getting a chance like Steve Carell under Judd Apatow) does  wet-behind-the-ears pretty well in this fish-out-of-water indie comedy.

A likable, if fragmented Cedar Rapids may remind many of Helms's Andy from the hit small-screen series The Office as the tall actor leads a decent ensemble which includes Anne Heche, John C. Reilly, and Isiah Whitlock, Jr.

His Tim Lippe (rhymes with hippie) has no idea what he's in for when he's sent to the eponymous Iowa City to represent Blue Star Insurance (from small town Brown Valley, Wisconsin) at the annual ASMI insurance convention. That's because of the unexpected demise of Blue Star's most successful salesman. Tim will find himself under the "guidance" of three conference veterans like Dean (Reilly of Cyrus), Ron (Whitlock) and Joan (Heche, who occasionally dabbles on the silver screen these days). His sheltered existence somehow makes him a draw to the distaff side, including a local call girl (Alicia Shawkat).

The goal of a socially reticent marginal professional (at this point in his life) who has a weekly fling with former elementary school teacher (Weaver) is to get that all-important Two Diamonds rating.

Director-scenarist Miguel Arteta stirs up much wantonness greeting a really nice guy like Lippe in a "big city" like Cedar Rapids as disparate folks like Dean and Ron. Reilly, and Whitlock, to a different degree, bring extroverted and conservative force to their roles, respectively, which helps provide needed verve to a film that almost loses sight of main storyline.

Arteta's recent Youth In Revolt worked more efficiently from an absurdist arrested development vantage point than the obvious turns for hedonism and corruptible comedic effect. Those who liked Reilly in films like Walk Hard or Step Brothers will revel in Dean's shenanigans. Whitlock makes the most of his smug black salesman's line readings working well off his appearances in the popular cable series The Wire. Heche (who starred with Ashton Kutcher the little-seen Spread) brings some affable comedic spark to her scenes with Helms as her saleswoman finds needed release in this kind of event.

Cedar Rapids finally relies on contrivance with a wild pugilistic crazy high to conclude its brief run-time. Something this effortless and eventful may be too erratic for its own good even if it taps into some of the pleasures of something more mainstream like Hot Tub Time Machine. One just hoped that an adroit Arteta and his colleagues could have brought more substance and originality, but with the insurance of Helms and an over-the-top Reilly it might be silly enough to be with Midwestern salesmen like these.