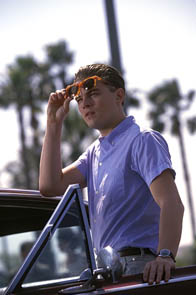 Catch Me If You Can

In what one might easily mistake as a made for TV movie, Catch Me If You Can chronicles the antics of a real life con artist named Frank DiCaprio from the ages of 16 to 21.  It seems that while posing as a doctor, lawyer and airline pilot Frank managed to cash over $2,500,000 in fake checks.  Oddly, now Frank Abagnale, Jr. is one of the foremost authorities on bank fraud and corporate security.

Playing the flamboyant Abagnale is Leonardo DiCaprio and all in all he does a decent job of the material given him.  Like all good thieves he was pursued by the police, in this case the FBI and in particular Carl Hanratty played by Tom Hanks.  The two play a rather odd cat and mouse game for years with Abagnale abandoning one persona for another as the FBI gets close and ending up forging a peculiar bond bordering on friendship.

There are many different subplots running here, Abagnale resents his mother (Nathalie Baye) for leaving his father (Christopher Walken) for a more well to do man.  He loves his father and even at the risk exposing himself he keeps in contact.  There is a very human side to this character and one that is almost endearing yet very one dimensional.

Even during his love affair with a nurse he met and eventually married and yet abandoned during the reception to save himself, DiCaprio keeps you involved by shear good looks and suave appearance.  It seems that freedom and money plus the thrill of the con were what kept the young Mr. Abagnale on the move and in play.

It was impressive to see the detail of the period portrayed by director Steven Spielberg from cars to hotels, to costume to the reverence give pilots of the period and the innocence of the times and just how easily people could be fooled.

While running 140 minutes the movies moves well, but some attempt at redemption for Abagnale forces us to sit through 15 or 20 minutes that easily could have been left on the cutting room floor.  The most poignant scene is when, after being caught and escaping, Abagnale goes to the home of his mother only to learn that he has a half sister and that his mother has yet again traded up on husbands all by looking in the window of her home before being arrested on the lawn.  The asking to be put in the car before his mother and sister discover what and how he appeared show a deep love of family despite years of abandon.