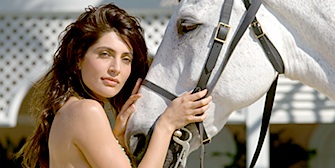 
The newest James Bond played by Daniel Craig is blond, brutish and rough around the edges, and Mr. Craig is a natural in one of the best Bond films ever made.

Casino Royale based on Ian Fleming's first novel, introduces Bond just as boss-lady M (Judy Dench) bestows "00" status on him. She thinks that perhaps her decision was too hasty, when in a spectacular opening chase scene he reacts foolishly and ends up on the front page of the newspaper, not exactly where a superspy wants to be.

The story, directed by Martin Campbell revolves around a hundred million dollar poker game that terrorist money broker Le Chiffre (Mads Mikkelsen) sets up. He's out to recoup millions that he stole from his clients and lost while playing the market.

Bond's role is to win the jackpot so Le Chiffre will be forced to make a deal with the British government in order to save his own skin.

She's not your run-of-the-mill "Bond Girl," Vesper is witty, sharp and not easily taken in by the attractive Mr. Bond. Not at first, that is. The two have a great scene where they toss insults back and forth while riding a train. Bond does fall for her and the usually aloof spy finally gets to show some real emotion.

Along with changes in the main character's appearance, also changed are some things we've all become used to in the previous 20 Bond films. Gone are the nifty gadgets, and the "shaken, not stirred" martinis, and even the bikini-clad babes, although, the muscular and toned Mr. Craig does have a couple of bathing suit scenes himself!

Not since Sean Connery retired have I enjoyed Bond as much. Along with one of the best action sequences ever, we get to see a much more complex character, not quite as suave and perfect, but I think, much more interesting.

The climax promises a future for the series, and I for one can't wait.