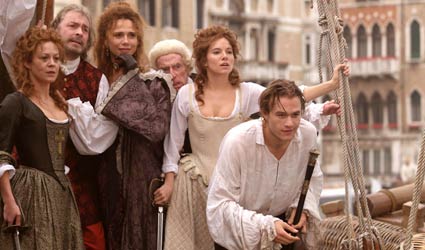 It's hard not to ackowledge the craftsmanship when it comes to costuming, designs, and cinematography, as Oliver Stapleton excels in the latter when it comes to making 1753 Venice very alluring with the gondolas, and so on.

Yet, this new "Casanova" isn't the crowdpleaser that it thinks it is, definitely assured in what it sets out to do regarding love and mistaken identity. Still, it's rather low on the witty and sophisticated scale.

Ledger, so affecting as a taciturn lovelorn cowboy in Brokeback Mountain, can't rise above the uneven tone and posturing brought on by writers Jeffrey Hatcher and Kimberly Simi.

He is the notorious lover and derided in St. Mark's Square and around marionette plays around Venice. Hallstrom discreetly shoots some scenes with a lascivious whiff of Dangerous Liasons and Casanova is marked for debauchery by the Inquisition. He escapes a nunnery with kisses blown his way as he flees into protection by the liberal-minded Doge (Tim McInnerny).

The catch for Casanova is that he must enter matrimony or flee the city, never to return. The ideal virginal bride eyed by him and his manservant Lupo (Omid Djalili) is Victoria (Natalie Dormer).

Victoria is pined from not that afar by Giovanni (Charlie Cox) who resides with his mother (Lena Olin) and sister Francesca Bruni (Sienna Miller). Francesca is getting ready to marry an opulent, very rotund fellow, Paprizzio (Oliver Platt), a fiancee she hasn't met yet. Paprizzio is the lard king of Genoa making his way to a woman whose family needs more than her.

Hallstrom doesn't shy away from staging sequences that can entertain like Shakespeare in Love or The Three Musketeers, realizing where the idea of lust can take the characters and story. Yet, as Casanova isn't noticed for the seducer he is before and after a duel, the film is unable to make Ledger and Miller connect on screen despite working diligently from a nom-de-plume of books that would have made Susan B. Anthony proud.

Casanova captures its mirth with some Monty Python farcical sashaying, but even having Jeremy Irons turning into an Inspector Clouseau type as picky Chief Inquistor Pucci doesn't reap much on the drollery end. Platt, a scene-stealer in the darkly comedic Ice Harvest, earns the biggest chuckles, especially when thought to be a philosophizing heretic, ready for the fat farm. Miller convinces nicely after decent supporting stints in Alfie and Layer Cake, proving that there is a smart, seductive actress who isn't just Jude Law's girlfriend.

Around later action flourishes, all the pretending reveals a contemporary touch when it comes to spreading the images for all to see. Yet, Hallstrom and Ledger don't have the flair this time like the spectacle of fireworks or a hot-air balloon. Fattened with deception, even a sumptuous Venice and a few surprises doesn't make for an oddly delightful romancer, never blossoming in ways that one might find snapping thick wood euphoric.