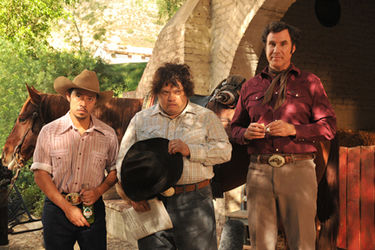 
This new Mexican-based feature is billed as "the funniest movie you'll ever read" has Will Ferrell showing up in neckerchief and full phonetic (American-accented) bravado in what isn't much more than a stretched-out, misguided mischief. Though not as much so as his Land of the Lost or something cruder like MacGruber.

Or, is Casa de mi Padre (in Spanish and English with subtitles) a cheesy way for Ferrell and producing partner Adam McKay to fitfully send up those Grindhouse B-movies and telenovelas of yesteryear (say 1972) done off a conceit that may benefit those more fluent in Spanish? Yet, in this case in contrast to their nutty, but more consistently amusing Anchorman, the ad-lib comedic mindset is too sketchy at best reaching high points like those in Semi-Pro but not really inspired like Mark Twain humor honored actor is capable of doing.

Director Matt Piedmont and writer Andrew Steele (key on-line collaborators with Ferrell at Funny Or Die) seem to think the gags will come just because Ferrell is in the scene, but their ham-fisted and indolent riffing get the best of them for what possibly looked like a cinematic taco worth savoring.

Ferrell inhabits Armando Alvarez, the good-for-nothing son according to his Mexican rancher father (the late Pedro Armedariz, Jr.) actually does the work during the absence of his presumably more successful, randy brother Raul (Diego Luna of Contraband).

The storyline pivots from the presence of a snaky cretin mafioso kingpin Onza (Gael Garcia Bernal of  Letters to Juliet,Babel and with Luna in Rudo Y Cursi) against the Alvarez estate. Armando has to step up with Raul while getting closer with his brother's new misses, the lovely Sonia (Genesis Rodriquez of  Man on a Ledge).

The effort into the translation of Casa de mi Padre with a wedding massacre (done to bloodletting excess) and Armando's flashback to his mother's death just outweighs how far the cuteness (with inside jabs) can camouflage the ethos and pathos to the extent accommodated by intentional low production values. If enough laughs aren't offered by a mostly ineffectual (former SNL) comic this time around (see his Everything Must Go for a more fully fleshed-out character) there are some cheeky diversions like stuffed (and talking) animals and faux, fast-moving backgrounds, besides the zaftig Sonja that still don't make the manageable run-time pass by soon enough.