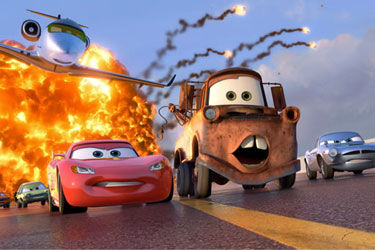 
The first Cars appeared more natural in Radiator Springs with the sad but big past winner, the 1951 Hudson.   This version brings the cars all the way to Europe and Mater into the world of spying and international intrigue.

The later sequence which parallels the big race and a race to prevent the bad guy (car) from ruining the event and controlling automobile fuel is a bit too long and drawn out, but the effects as used overall in this episode are spectacular to watch in either 2D or 3D.
The angles and motion are sleek and smooth and look like exaggerate real motions rather than an animated experience particularly during the race scenes and the chase periods in the film.   When Holly Shiftwell begins to fly it brings a little drama which kids enjoy, but extends the down to Earth quality of the first chapter beyond the original concept.

Mater gains respect through his insight into what is new in an engine compartment and Lightning learns he needs and respects his friend Mater as the plot becomes international before the story ends.

Michael Caine's Finn McMissile the sophisticated European sports car and international spy leads the good guys to protect both McQueen and Mater from destruction.   The car is as smooth as Caine.

The ability of Pixar to characterize these animated cars into living characters is remarkable, very quickly we are absorbed into the personalities, limitations and strengths of the vehicles.   Perhaps the strongest character of the series was Paul Newman's Hudson but they all are effective as cars with personalities.

The cars who are losers look enough like the vehicles which are referred to, they are close enough to be recognized but exaggerated enough not to be exactly like the actual vehicles represented.

Cars 2 standing alone is fine it's an OK film and enjoyable particularly for kids, but it suffers in comparison to the homey atmosphere of Radiator Springs and the relationships of the cars that populate that small town.   Bigger isn't better here.