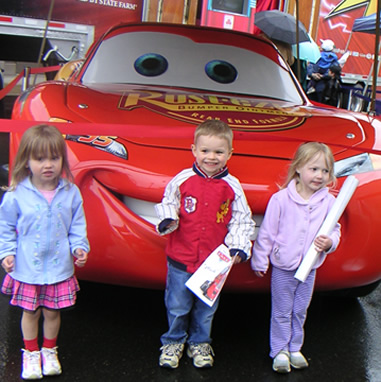 
A couple of years ago when I announced my top ten films on Friday morning television, my anchor questioned why three were animated features. It was easy to defend, other films were good but the greatest imagination in film making had turned to this style of entertainment, which can only appear on film. Cars is further evidence of the energy and creative thinking that finds its way into modern animated features.

Filled with references that the adults accompanying the kids will appreciate, Cars never fades for the grownups but it will loose the attention of some of the kids during scenes with long dialogue - it is a bit long for an animated kids film. One of the best references goes to Click and Clack "The Tappet Brothers," Tom and Ray Magliozzi from NPR's "Car Talk," when one of the characters says "don't drive like my brother." The depiction of a 1951 Hudson Hornet voiced by Paul Newman as the older car, Doc Hudson, not remembered for his multiple Piston Cup wins in the early fifties. He lives in semi-seclusion in the little by passed town of Radiator Springs. He is the focus of the theme of the story - friends are important - which so far has eluded the new star Lightning McQueen (Owen Wilson).

The nostalgia of the open road permeates the film following along the fabled Route 66 particularly in the West as it is glorified in song by Chuck Berry and John Mayer. Radiator Springs has lost its past glory due to the interstate highway which by-passed the town.

While Lightning McQueen shows off his Lightyear tires, John Ratzenberger's Mack truck carries the new hero as he snaps off wisecracks which are particularly effective during the ending credits. Lightning is interested in Sally Carrera (Bonnie Hunt) a sporty 2002 Porsche 911 from California who has relocated to Radiator Springs to manage the Cozy Cone Motel and get away from the hustle and bustle of modern life. Mater (Larry the Cable Guy) becomes Lightning's best friend as a tow truck that has had better days and has only one hope remaining, a ride in a helicopter over Radiator Springs. George Carlin fits well as the 1960 VW bus who has yet to leave his of love beads and flower children.

The opening scene fills the screen with the action on the race track with angles that no live viewing of a race that a fan could witness. Animation can be created from any angle bringing an exciting battle for supremacy between, The King (aka Strip Weathers) a 1970 Plymouth Superbird voiced by Richard Petty, a seven-time NASCAR Nextel Cup Championship winner, Chick Hicks (Michael Keaton) the obnoxious one, he is a non descript car and Lightning McQueen. Winning makes McQueen the most famous car in the land.

Lightning falls from the back of Mack on his way to California and is stranded in Radiator Springs where the script holds him until the end of the film. It's there Lightning interacts with the many other car characters which not surprisingly have the same emotions people experience.

Nicely cast and well animated Cars is one of the better films on a short list of quality so far into this summer season.