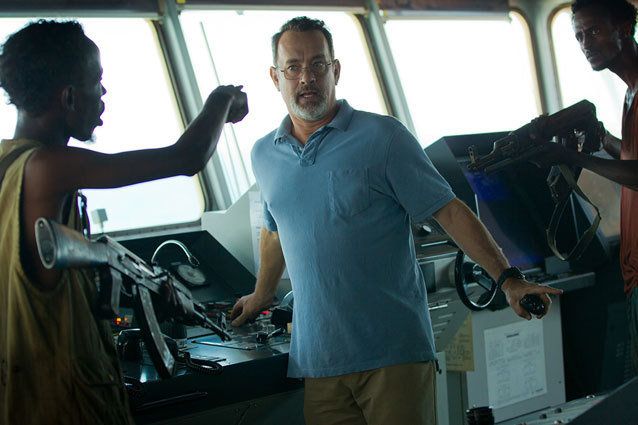 
Buoyed by the depiction of  high-seas tension from helmer Paul Greengrass (United 93, Green Zone), Tom Hanks (Cast Away, Cloud Atlas) shines in his best role since the aforementioned 2000 Robert Zemeckis epic adventure as FedEx supervisor Chuck Noland which was remembered for his weight change (that affected its filming) and a volleyball named Wilson.

Captain Phillips (around a third of which is subtitled) has Hanks doing his Everyman character - here Richard Phillips first seen in Vermont with loving wife played by a wigged Catherine Keener - with enormous understated resiliency in connecting a raw, riveting visceral experience. A kind of cinematic unraveling bluster - stranger than fiction - in recounting the 2009 hijacking of container vessel Maersk Alabama by Somalian pirates.

An efficient, if less socially, economic and politically relevant (read: globalization) screenplay by Billy Ray (The Hunger Games, State of Play) demonstrates a fateful battle of wills some 145 miles off the Somali coast. Insinuating as well as splicing moral complexity and human interest isn't easy to do while finding urgency and key thematic concerns in an adaptation of a novel by Phillips himself with Stephen Talty. From the farewell to his wife, gaining control of what would be assaulted, being in a tiny lifeboat and part of a rescue by Navy Seals and other agencies the early domestic dichotomy between Phillips and his desperate, in-over-their-heads counterparts exposes a greater superpower hostility and avarice perhaps from an arrogantly peaceful gesture.   One could see how a "necessary evil" could have been a hasty means towards accomplishing the American Dream.

Greengrass obviously has a penchant for recreating such inflammatory political events with dextrous kinetic flair (as was portrayed in Bloody Sunday with British troops in Northern Ireland). With the use of trademark handheld (queasy camera) lensing courtesy of Barry Ackroyd (Zero Dark Thirty) a sweeping, survivalist tale has an intimacy to guide with enterprising intellect and genius while honoring valor and patriotism. Though some may be so into the undulating realism that a Dramamine might not be out of the question.

As the pirate underlings, Mahat M. Ali, Faysal Ahmed, and Barkhad Abdirahman relate a certain amount of amenability while more attention is given to Barkhad Abdi's Abduwli Adukhadir Muse, Phillips's chief adversary, a former coastal fisherman and their brains who may come across as too much of a schizoid. Yet, the screenplay through exposition and important stretches of dialogue might indicate characteristics and psychological tendencies to decant what appears to be purely implacable. Abdi does have his moments opposite a hardy Hanks especially as the tension mounts aboard a lifeboat.

Captain Phillips consistently keeps the stakes high throughout offering its share of exciting twists and turns for this kind of fact-based drama. A transforming one at least for  Hanks as a persuasive Richard exudes the same kind of strengths as Chuck Noland. Even as another crossroads is reached during an examination that provides quite an emotional, if muted outlet.