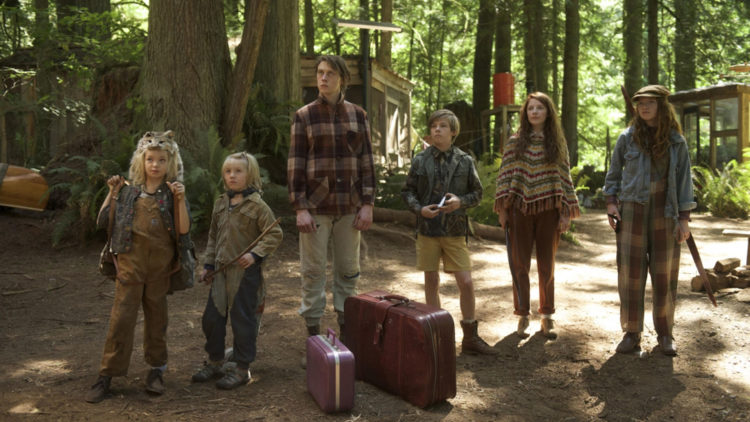 
A bushy hirsute Viggo Mortensen (The Two Faces of January) headlines this occasionally droll and finally sentimental portmanteau of The Mosquito Coast and Little Miss Sunshine.

Matt Ross's Captain Fantastic sees the actor turned writer/director more convincing in handling his choice cast actors than a narrative which loses durability and resonance in its later stages. Even though there is inconsistencies with Mortensen's socially aloof Ben Cash, it is a mostly enjoyable portrait from homeschooling and seclusion in the Pacific Northwest. In the Cash line of thinking, "interesting" is considered a non-word and cola is "poison." Ross draws from his own communal type of antediluvian upbringing which translates into rigorous intellectual and physical off-the-grid living.

A dysfunctional brood of Ben and his six kids (with invented monikers) in survivalist mode something out of Lord of the Flies when not displaying their prodigy nature with knowledge of Bach, Dostoevsky and 1960's liberal darling Noam Chomsky (his day is a major celebration for this brightly erudite clan) suddenly are taken out of their element. Their Buddhist bipolar mother (Trin Miller) has taken her life and her parents (Frank Langella, Ann Dowd) want a traditional Christian burial.

So, like the more sentient, more outrageous Sunshine, there is a road trip (with a bus named Steve) to a metropolis which involves familial (not to mention culture) clashing, not the least of which with Ben and oldest, loyal son Bodevan (George MacKay of Pride) upset about their freaky qualities as adolescent urges are something he's already started to explore. As well as an interesting to pursue higher academic learning when it comes to being a university attraction.

Some amusing episodes as Ben intends on retrieving his deceased beloved include posing as a Christian group to keep authorities off track, but the handling of bereavement amidst shenanigans isn't that pliant perhaps in a ad hoc way that loses pacing and drive when reaching a moving denouement. Ross does well enough with the kids to give them enough of a distinction that helps makes it all watchable from varying standpoints even before an awkward funeral entrance.

In its outré maneuvering Captain Fantastic turns out to be a conventionalized whimsically bohemian 'Swiss Family Robinson' that is easy to admire via easy-going lighter strokes from an arguably crazy, yet stentorian figure in Mortensen (known more for his serious acting as in A History of Violence and Eastern Promises). But, the filmmaker's inability to lift it into a more gratifying, less fantastic realm proves that it isn't that easy to duplicate an endearingly off-center "fish-out-of-water" formula.