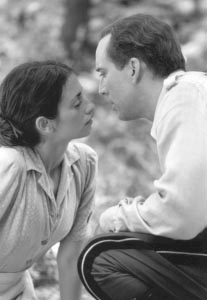 This film takes place during World War II in 1941 when the Greek island of Cephallonia was   occupied by both German soldiers and a small Italian troop, headed by Captain Corelli (Nicolas Cage).

The Italians spend their time romping on the beach with prostitutes (which they brought over on their boat) or singing opera.  The Greek people hate them, and when the Mayor of the picturesque haven is asked to surrender his town, he proudly tells Corelli that he'd sooner give up to the German's dog, than to the Italians.  Not a promising start to a love story between a Greek woman and an Italian man.

The soldiers have to bunk in with the locals, and Corelli is assigned to move in with Dr. Iannis (John Hurt), the village physician and his beautiful daughter Pelagia (Penelope Cruz).  The doctor accepts his unwanted boarder because of a deal he makes for medical supplies in return, but Pelagia hates the man, despite his classical singing and amiable personality.

In time, Corelli's charm wins over Pelagia, even though she's engaged to Mandras (a dark haired, bearded Christian Bale), a handsome local, who joins the Greek army and leaves to fight for freedom.

The romance is the main story, with the occupation and war taking a back seat.  However, the screenplay uses the initial feelings of hatred that Pelagia has for Corelli to build the passion they feel once they fall for each other.  Forbidden love always seems sweeter.

The actors play ethnic characters different from their own background.  Cruz is Spanish and both Cage and Bale are American.  Only the fiery actress Irene Papas, who plays Mandras' emotional mother, is actually Greek.  Even so, Cage's Italian accent is passable, but Hurt's Greek accent sounds decidedly British.

Filmed on the Greek island of Cephallonia, the scenery is breathtaking and a lovely backdrop to a good, old fashion love story starring two engaging stars.