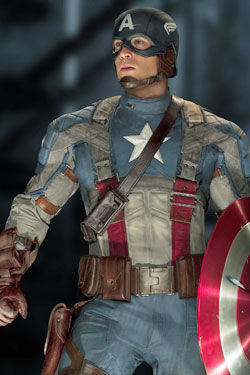 
The latest Marvel Comics film adaptation of a red, white and blue hero with a shield comes to play as a pulpy old-fashioned adventure with contemporary special f/x that gets us ready for next year's The Avengers (under a new studio banner).

Brooklyn-bred Steve Rogers desperately wants to help the Army in the US war effort in 1942 when Hitler looked to be unstoppable throughout Europe. But, there are health concerns of the 90-lb Steve who wants fight with his friend James "Bucky" Barnes (Sebastian Stan).

Luckily, however, a sympathetic German scientist (Stanley Tucci) notices an opportunity for the earnest scrawny enlistee (read Army washout) and puts him in a classified project that renders him a new kind of super soldier. Steve's paired with the alluring Agent Carter, a perky Atwell, and he's made fun of as wartime messaging (like those old newsreel films). Later, though, he'll have his chance especially when Bucky is trapped behind enemy lines as a secret weapon begins to be deployed another fearsome Nazi in Johan Schmidt (Weaving).

Evans is somewhere in between the initial weakling and the buff propaganda figure done fairly well through CGI (though maybe a little off-putting initially). But, the storyline crafted by Christopher Markus and Stephen McFeely postures well off the origins of a smaller Steve and keeps its mechanics and structure nicely in check.

The actor from The Fantastic Four movies (as The Human Torch) might not be that charismatic here, but effortlessly projects the right amount of vulnerability and heroism the role requires. Against Atwell, the latter works as romance will inevitably kindle. Jones offers important backup as Col. Chester Phillips who fills the role with wisecracking cynicism, part of the virile humor that helps drive what looks and feels like one of the old lively serials. Like Ralph Fiennes's Lord Voldemort, Weaving's Schmidt and morphed "Red Skull" of the wicked Hydra organization has some megalomaniacal might to it.

In his scenes, Tucci (The Lovely Bones) impresses for the motivations of his knowledgeable Erskine as he figures in Steve's blossoming willpower. Relegated to lesser parts are Dominic Cooper as cutting-edge mechanical engineer and industrialist Howard Stark (Tony's dad) and Toby Jones as Schmidt's right-hand scientist.

Pleasurable summer entertainment powers through some well-crafted set-pieces as Johnston with his production team often en-lives the action-adventure with a pleasantly retro feel. Yes, some of the more energetic artillery scenes get a little wearying after a while as a shield is used like a Frisbee at times.

With solid actorly footing under an able Evans, a slick recreation of the look and fashion of the turbulent, patriotic times, The First Avenger has enough to captivate and cheer about. Captain America is poised to look good alongside allies like Hulk, Iron Man, and Thor.