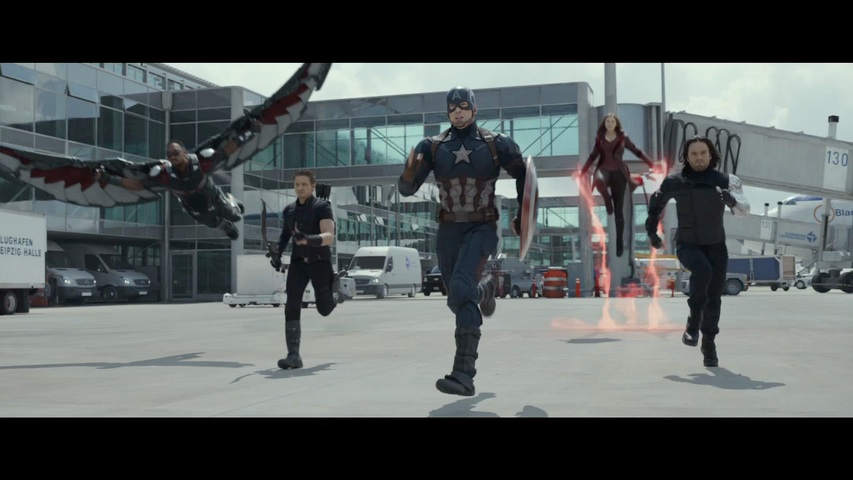 
Even though this prolonged, though fleet-a-foot new Marvel action blockbuster will please its oh-so loyal fan-base more than your average discerning cineastes, its spectacle and sometimes exhilarating set-pieces doesn't really overwhelm a provoking moral complexity at its core. Of course the inimitable progenitor Stan Lee has to receive his obligatory cameo, here as a driver of a famous shipping company.

Captain America: Civil War is directed by Anthony and Joe Russo with a certain amount of sure-handed lassitude that provides many instances for its sizable cast to chew on even if some are given short shrift.  Team Cap versus Team Iron Man for those who are oblivious to the marketing and may get more jolts than some when it comes to betrayal and duplicity within the Superhero ranks as free will puts friendships to the test.

The absence of Thor and Hulk are explained in a franchise that surges on with pathos and wit and a more pronounced saturnine tone this time after Avengers: Age of Ultron which apparently burnt out helmsman Joss Whedon. Nominally, there's Capt. America, Steve Rogers' shielded hero from the FDR era, who will represent the Avengers autonomy against filthy rich, risk-taking entrepreneur Tony Stark/Iron Man acquiescing to hierarchical control from the U.N. After unnecessary casualties in Lagos, Nigeria and a subsequent fatal U.N. bombing sets the ideological divide in motion.

Gradually, a resonance will emerge from the conflict which touches on the edgy and emotional around unilateral intervention. A mystery thriller unfolds when it comes to Chris Evans' rogue Capt. America out to protect and look out for his trusty, if brain-washed on-the-lam friend Bucky Barnes (Sebastian Stan, aka The Winter Soldier) was responsible for a dastardly act. Especially when the calmly ambitious, chillingly sleek lone operative Zemo (Daniel Bruhl) has much interest in him and appears to be doing much without being noticed. Gravitating to one of the sides are dimension-contorting Scarlet Witch (Elizabeth Olsen) and The Vision (Paul Bettany, in an amusing turn) who make their own underlying strand rather affecting.

There may some plot hiccups that even the aficionados would admit to in the screenplay translation from its antecedent to guarantee enough flashy and sharply rendered CGI-enhanced mayhem. Though in IMAX 3D the result may be diminished. The wavering, if piercing dynamic that plays out between Tony (Robert Downey, Jr.) and Steve (Evans, still being upstaged to a degree by Downey, Jr. et. al.) given the strong bonds and goals that have existed in a fellowship and the irony in their schism still has notable narrative propulsion.

While an amazing sequence occurs at an airport that rivals the very acme of entertainment the studio has produced to date, it still keeps the underlying characters, whether for Tony or Steve, in a precarious or vulnerable position which doesn't really diminish their arcs. Yes, Jeremy Renner's Hawkeye and Don Cheadle's James Rhodes/War Machine might have gotten two of the shortest straws, but they have their moments. The Falcon's Anthony Mackie has fun with his one-liners, while Scarlett Johansson's Black Widow/Natasha reveals the struggle around the impending crossfire.

Having Chadwick Boseman's engaging and acrobatic Black Panther who gets caught in the situation early after collateral damage is a bonus for a new opportunity to showcase a new character in a standalone feature. As well as Spider-Man (Tom Holland) who also brings zest to the proceedings after a funny recruitment by the sarcastic Stark. And, being up to date with eight Marvel releases includes Ant-Man whose Paul Rudd offers the kind of wry presence with spry tenacity which proves scene-stealing and beneficial (in the light relief department along with nerdy Holland) to the twists sported in the offing by the filmmakers.

Is Civil War a top-tier Marvel film? Yes, even with its flaws and perhaps the resolute way it must set the stage for the two-part climactic The Avengers: Infinity Wars commencing in a couple of years. William Hurt's politician and Martin Freeman's militarist are more like pawns to let Cap and Iron Man do their thing which gets wild, woolly and even wrenching with some eventful recollection (around switching allegiances and shady inclinations). But, it doesn't take a solemnly earned detrimental toll like a recent D.C. Comics superhero clash to get its franchise revving staying exuberant and leaving the preponderance of onlookers hardly reeling like the overweening bombast that an undermining "Ultron" made them endure.