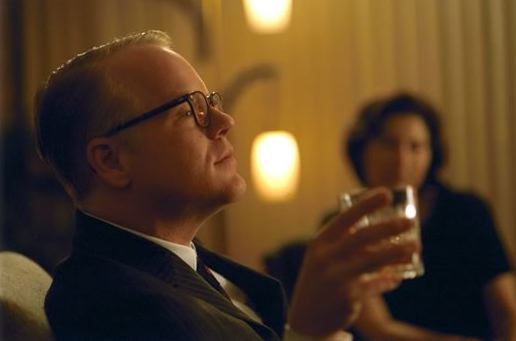 
It would be a grave disappointment if Philip Seymour Hoffman isn't recognized as a major awards contender for his portrayal in the fascinating drama Capote.

This character-driven picture has the diligent actor who has starred in a lead performance in Owning Mahowny and Love Lisa realizing the multi-faceted, talismanic, ostentatious Truman Capote. Capote hung out among the jet set and the rich storyteller was the legendary writer of "Breakfast at Tiffany's".

This famous Southern scribe comes to life in what covers just a few years in his life set in 1959. Director Bennett Miller makes it incisive through Hoffman by relating Capote's creation of the seminal crime novel "In Cold Blood."

This soulful performance by Hoffman eclipses stellar support in pictures like Almost Famous and Magnolia as Capote goes about investigating a murder case of the Clutters, a simple rural family from Holcomb, Kansas.

His goal is to produce an original non-fiction novel from the senseless crime. Capote is accompanied by his childhood friend and author Harper Lee (Catherine Keener of 40 Year Old Virgin), who wrote "To Kill A Mockingbird."

The screenplay by Dan Futterman becomes more textured once the vicious culprits are apprehended. The relationship that Capote has with one of the killers, Perry Smith (Clifton Collins, Jr.), exposes the vulnerability and loneliness inside himself. It's a covalent bond that helps create the remarkable "In Cold Blood" and uproots its creator.

Miller engagingly directs this edgy, sharp portrait of an artist unafraid to flaunt his ego to sate his journalistic drive. Hoffman expertly builds from the filmmaking canvas and the serving nature of his co-stars, especially Collins, who fashions a riveting alter ego to the novelist. What it took to make such a complex, illuminating reflection on America at the time captivates throughout in dramatic form with impulse and curiosity dressed to kill.