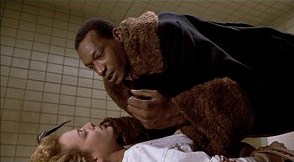 
Helen Lyle (Virginia Madsen), an ambitious urban mythology student, plans a dissertation that will make her famous. She regards oral folklore skeptically, that is before she begins to follow the story and actions of Candyman.

Candyman (Tony Todd) it is told was a young black man who fell in love with a young white woman in the 19th century, and was hacked at and covered with bees to kill him when it was found the woman was pregnant. He died at Cabrini Green, the present site of the notorious crime-ridden projects in Chicago.

Lyle has great courage when she enters the projects to extend her research on the violent folklore of Candyman. She is attacked by gang members, but they are the least of her worries. The Candyman is out to get her.

Based on The Forbidden by Clive Barker, director and writer Bernard Rose has crafted a tense, frightening, brutal Gothic horror tale. Helen is drawn toward Candyman as women are drawn to Dracula. There are a few calm, passive scenes, and they are a welcome rest from the vortex which Helen is drawn into when she enters the realm of the violent revenge-filled world of the mystic killer who appears whenever his name is stated five times into a mirror,