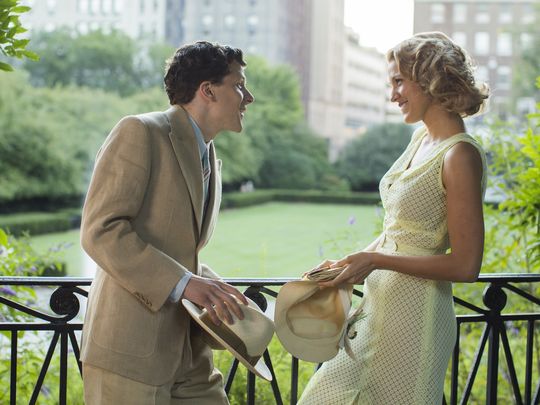 
Octogenarian award-winning filmmaker and scenarist Woody Allen has his way around Hollywood and New York with flourishes of romance, acerbic exchanges and mayhem in his latest effort starring Steve Carell (Foxcatcher), Jesse Eisenberg (Now You See Me 2), and Kristen Stewart (Still Alice, Anesthesia).

A nostalgic ochre glow for the silver screen's Golden Age offers a glamorous sheen for Café Society set in the 1930s maybe doesn't inspire viewer ardor like the neurotic Jewish icon who hasn't scored a hit since Blue Jasmine with the classy, versatile Cate Blanchett.

Perhaps having Eisenberg and Stewart (with some on-screen sparks) together will help draw more of a millennial crowd in their third pairing after Adventureland and American Ultra. Allen's story may be slight and more derivative compared to earlier more accomplished efforts but it's genial enough even for discerning cineastes who generally gravitate toward his films.

Eisenberg's New Yorker Bobby Dorfman wants a chance to get into show business through his Hollywood top agent/mogul Uncle Phil (a somewhat neglected Carell of The Big Short) after tiring of his dad's jewelry enterprise. Phil will acquiesce to the young man while dealing with highbrow clients whose last names include Dunne, Powell and Rodgers.

The gofer of a rube will be taken around Tinseltown by the agent's sweet secretary, a pretty likeable Stewart (though looking content to be working for Allen) as Vonnie to get a lay of the celebrity land. The typically polished production accentuated for period feel in design and costuming, incorporates jazzy riffs to complement a nightclub scene which will be in Bobby's future after he becomes more intimate with Vonnie.

A love triangle that might not be considered that compelling includes Phil who apparently is willing to sacrifice a wife and family leaving Bobby on the fast track for the Big Apple. The titular club fronted by his thuggish brother Benny (Corey Stoll of Ant-Man) will be on his professional agenda.

The lensing offers a handsome distinction even if the filtering process/aura leaves an unflattering visage at times on the cast. Some of Allen's dabbling here has a schematic tangential to past successes like Midnight In Paris and Annie Hall but Café Society isn't the poised, pliant cinematic curio and observant ode that it intends to be.