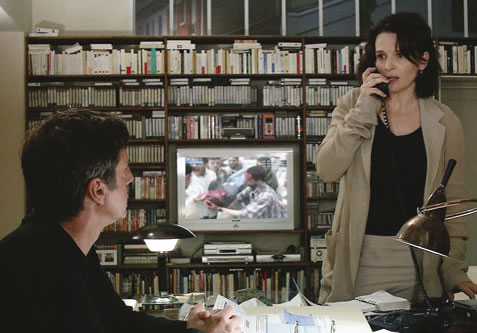 
Caché, in French with English subtitles, translates as 'Hidden', and Michael Haneke crisply lets one in on a mysterious, intense allegory where the political masks a deeper psychological sojourn.

Haneke, director of The Piano Teacher, won top directing honors at this year's Cannes Film Festival. He opens with a crisply single-shot credit sequence that draws one into the lives of Georges and Anne, played by Daniel Auteil and Juliette Binoche (Bee Season).

This upscale couple soon become unsettled when they receive a videotape of their house being watched. They have no clue who is behind this and more darkly revealing tapes are sent. Could it be a classmate of their nearing-teenage son (Lester Makedonsky)? Or, perhaps a creepy fan of Georges, known for his hosting of a literary TV talk show?

The pacing is measured, but in such a way to escalate the tension through the audience being in on the voyeurism. And, also able through the camerawork and spare, but nimble screenplay (also by Haneke) to make us feel the surveillance, not so unlike an indelible picture like The Rear Window.

The approach may feel cryptic for awhile, but it makes one want to try and solve a puzzle which upends an illusion of serenity with an elusive, but compelling power. The use of an Algerian servant when it comes to life at one character's childhood domicile is key to realizing a political importance. But, the details unfold naturally within changing points of view and reinforcing images as Haneke deliberately uses long takes and static camerawork from Christian Berger for bracing effect.

Caché can be capricious, but sneaky in ways that intensify confrontations with flashbacks and nightmares, in one instance from two different angles. It fiercely makes the viewer vulnerable and curious with the ability to be subtle, yet raw.

It all wouldn't work without the expressiveness of seasoned performers like Auteil and Binoche as Georges and Anne let us into this hurt professionally and personally and how they handle it individually. Opening a long-shut closet with a certain kind of skeleton can have harsh ramifications.

Finally, "a campaign of terror" shows how piercing filmmaking like this can be, giving greater meaning to "pathological hatred" from the social, ethnic, and economic forces from one person, a country, and even the world. This real-time-ish disorienting spark of cinema feels so timely regarding the handling of lies, culpability, and fear that makes the despair so brutally real.