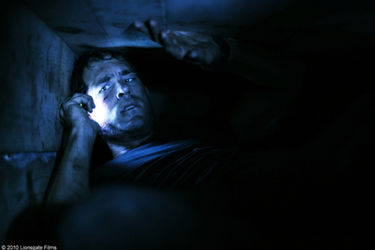 
In Buried Ryan Reynolds more than meets the demands of a nick-of-time suspense thriller.

His Paul (as we learn) is a U.S. (sub) contractor working in Iraq as a truck driver. There's an assault on his convoy by who may be local insurgents and he ends up alive inside a coffin. With only a lighter and a BlackBerry will he refuse to succumb to this unusual death trap.

Some may question the reality of the circumstances beset on Paul with little, including his wits, at his disposal. A talented director in Spain's Rodrigo Cortes provides the necessary support for Reynolds to rise from such a claustrophobic position.

Cortes lets the viewer into Paul's limited space with relative ease as a painful struggle ensues for a man who is a typical happily married as well as a father from a small Michigan town.

Buried (after the opening reel) seemingly plays out in real time with technical prowess as Paul fights a waning oxygen supply as well as the battery on his connection with the outside world with his signal obviously less than strong. To avoid an external excavated state he has to maneuver himself against those placing a multimillion dollar ransom over his head.

Clearly director and star push themselves with bold alacrity to make this tale of survival simmer with startling nightmarishness similar to the extremes felt in something like The Vanishing. Their surprising efforts are abetted by the director's own editing, along with an eerie score and sharp, often robust lensing.

Even if a couple of instances can be scrutinized, a revered maestro like Alfred Hitchcock would admire this kind of mordant cinematic modernized riddle, nearly always intriguing through its supreme deadline and confined space.