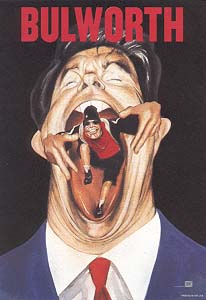 Warren Beatty's Bulworth talks about everything and says nothing.

The despondent Senator Bulworth hires an assassin to kill him.  That, combined with little sleep and no food, sets him loose in his campaign for the U.S. Senate in California.  The new freedom allows him to attack the American campaign finance system, large corporations, the health insurance system and the problems in the African American community.  It all comes out in rap rhythm after he spends a night at an after-hours black nightclub.

The vulgar language which permeates the entire film is not shocking; it is incendiary and irritating. Creative use of obscenities in the right place can make a point.  Using it constantly wears the audience down.

High points occur when the Senator helps young kids with an abusive cop, and when the local drug dealer decides there is another way.  Music and the celebration of the gospel mixed in black and white styles are comical and enjoyable.

Beatty's inventive character fills the airwaves with what is totally politically incorrect.  He lives in a world completely out of balance and far from reality.  His illogical remarks and statements provide hilarious moments and embarrassing hours for the Senator's bumbling aides.

Nina (Halle Berry) provides sensual excitement for the failing Senator.  She also introduces him to her family and to a neighborhood he would never normally visit.  The comedy insults everyone and the gaffs for normal politicians become a groundswell for the Senator in the middle of a nervous breakdown.

It will be difficult for average audiences to sit through the obscenities which come fast and furious and the ending should be different.  Bulworth entertains at times, but he's not a winner.