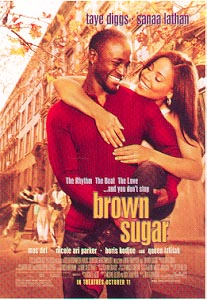 Amid the overabundance of fall opening, Brown Sugar is poised to engage those looking for some romance with a homage to hip-hop music.  What's appealing throughout the soapy predictable scenes is how the main characters emotionally touch each other through the music embodied by the those starting rap in the mid-80's when break-dancing was grooving in the Big Apple.

Rick Famuyiwa, who made the likable, but hardly seen "The Wood," has two of that film's actors here in starring roles - Taye Diggs of The Best Man and Sanaa Lathan of Love and Basketball.  Maybe Brown Sugar isn't quite as entertaining as those two films, but it has confidence in its actors to make it more than an agreeable date flick.

With the signature of rap music linking Diggs' Dre and Lathan's Sidney, who have had a love-at-first-sight relationship.

Set in New York Sidney promoted to hip-hop magazine editor of "XXL" and Dre on the verge of the elegantly possessive attorney Reese, chicly played by Nicole Ari Parker, last seen in Remember the Titans.

Diggs endows Dre with more than a bit of dissatisfaction in his career as the record executive feels bamboozled at his label (Millennium Records) because of a new embarrassingly funny black and white rap take on "The Girl Is Mine" done nearly 20 years ago.

The episodic tale by Elliot has Dre getting a loan from Sidney to start his own company with attention to signing the talented worn rapper, Chris acted with intelligence by real-life rapper Mos Def (Monster's Ball).  Contrasting Reese's relationship to Dre, is Knicks hoopster and wannabe rapper Kelby (Boris Kodjoe), the new, quite hospitable love interest for Sidney.  Brown Sugar unfolds with attention to how similar Dre and Sidney are beyond their careers.

Developing a chemistry akin to When Harry Met Sally, Diggs (soon to be seen in the screen adaptation of Chicago) and Lathan comfortably let one another take the roles to the levels that provide tension and tenderness for a smooth executive and a journalist.

While Brown Sugar goes the "purer" route dealing with music and people, an openness and creativity is felt in the production through the designs and costumes in appointing fashions of music.