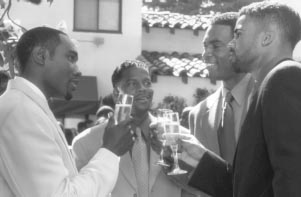 Perhaps a stance for equal opportunity considering the reaction to Terry McMillan's The Wood is Gary Hardwick's The Brothers.  Looking at career-minded black men dealing with dating, love, and sex in a new millennium reveals the director of Trippin, is trying to spark a response from the opposite sex in order to make it an attractive date flick which it really isn't.

The Brothers never hits its stride in terms of drama and comedy nor does it provide us with a lot of interesting insights into the complicated world of relationships.  Yet, it proves damaging to its four male leads, especially in the comedic talents of D.L. Hughley and Bill Bellamy who could have brought a noticeable sharp wit to the love life of yuppie black professionals.

Knowing that many of the scenes are loquacious, Hardwick generally can't enliven things with a dynamic that calls more attention than typical daytime fare.  With Hughley's Derrick, Bellamy's Brian and buddies Terry (Shemar Moore) and Jackson (Morris Chesnut) they all have some difficulties with women after playing their two on two basketball games.

Engaged to Susan Dalian's possessive Bebe is Terry and Derrick's recent marriage to Sheila (Tamala Jones) is not going that well; and the pediatrician Jackson is haunted by murderous women in wedding dress.

Instead of using its top liners beyond the mores of what affluent black men their age face, The Brothers is too narrative driven for its own good, as these urbane guys have little nuance to their parts.

Consequently, what could have been something that might have a broader appeal based on its cast, is undermined by Hardwick who doesn't spice things up with his crew as The Brothers may be up against more odds in finding audience support than the guys succeeding in their personal lives.  It surprisingly doesn't know how to market the personality that it has as it keeps one waiting to exhale for moments like Angela Bassett or Whitney Houston delivered or those hilarious, detailed standup routines seen in another Hughley feature film, Spike Lee's The Original Kings of Comedy.