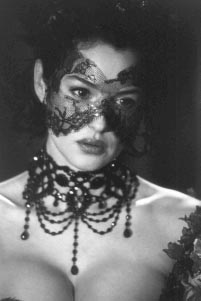 Brotherhood of the Wolf

The French-language film Brotherhood of the Wolf definitely qualifies as a guilty pleasure as it turns up the heat and action in unexpected ways for western audiences.

Those who dislike subtitles should not be discouraged by a sweeping tale which rarely languishes.  The dialogue, eroticism, and martial arts makes for a snappy, mythic 18th Century adventure.

Gans' title comes from what was known as the Beast of Gevaudan, a menacing, looming wolf-like beast which killed scores of people during the reign of Louis XV.

With Jim Henson's Creature Shop giving the hulking prowler brute and bite, the plot forms from the King's efforts to stop the murderous stalker.

Samuel LeBihan is the appealing scientist Fronsac and American martial arts star Marc Dacascos is his Iroquois friend out on the dangerous task.

There are some grabbing diversions as Fronsac seriously flirts with Marianne (Emilie Dequenne of Rosetta).  Also a roguish, comely courtesan is endowed with carnal power by Monica Bellucci of Malena.

Vincent Cassell, Bellucci's off screen husband, is the aristocratic, vigilant heavy of Brotherhood of the Wolf.  His Morangias is Marianne's brother and simulator who is part of a convoluted conspiracy.

Ultimately, if the last act takes its time to conclude, there's homage to film makers of yesterday which offers one more than a share of verdant, artistic shots.  The attitude of "letting go" while absorbing the winding plot is the way to get optimal enjoyment of a film which can be somewhat goofy, even gory, but flourishes from a mirror and the back of a highly becoming exposed woman.