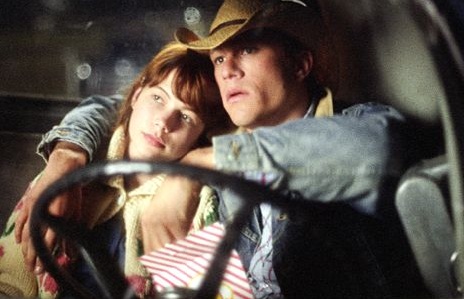 This sweeping Western is a sensitive drama directed by Ang Lee, quite observant to the repurcussions of forbidden love.

Brokeback Mountain, filmed in Alberta, and set in 1963 Wyoming, ironically may appeal most to women. Two rising male stars, Jake Gyllenhaal (Jarhead) and Heath Ledger (soon to be seen in Casanova), are able to make their dying breed of cowboy felt beyond what is spoken.

Gyllenhaal's free-wheeling Jack and Ledger's tight-lipped Ennis meet in the summer where they herd sheep on Brokeback Mountain. Randy Quaid (Ice Harvest) plays their boss with a certain amount of vigilance and understanding.

The screenplay by Larry McMurtry and Diana Ossana from Annie Proulx's short story delves into a camraderie that develops when Ennis comes in from the cold at Jack's request.

What happens between them isn't considered appropriate down the mountain, so both head on differing paths. Jack relocates to Texas and marries a well-off young woman (Anne Hathaway of The Princess Diaries). And, Ennis weds his childhood sweetheart, played by Michelle Williams.

McMurtry and Ossana expand Proulx mainly in providing bulk to the family life of Jack and Ennis. Yet, an intimate night that turns brief for Ennis and his wife starts to indicate where he would prefer to be. Eventually, four years hence, Jack and Ennis come together wondering, "What are we gonna do now?" Jack ends up averring that, "that ol' Brokeback sure got us."

Lee is able to keep things affecting as the film continues over nearly two decades, though there is a feeling as it nearly overstays its welcome. Brokeback Mountain reveals on notions of fulfilling an expected life and dealing with the involuntary aspects of love. One may want more tenderness and scenes between Jack and Ennis, but Ledger stands out in the way his romantic yearning comes on with understated heartfeltness. Gyllenhaal, Williams, and Hathaway all have their soulful moments, but Ledger surprises us with internal conviction his emotions has on reserve.

Through it all, Lee captures the scenery with his filmmakers with picturesque detail, working into the context of fear and tolerance in more rigid society. From the simple outdoor life to a character's gesture there's something poignant even if this relationship may never climb to the adult levels of a such a daunting mountain.