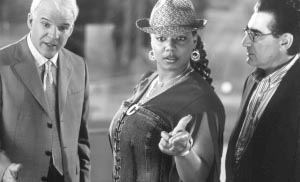 Bringing Down the House

Steve Martin playing Peter Sanderson a divorced, straight-laced, uptight attorney takes a chance blending comedy for two different audiences.  His co-star Queen Latifah is Charlene a prison escapee who claims to be innocent, crashes into his home life after engaging him as a pen-pal through e-mail.

Both stars venture into comedy that on one hand is comfortable for black audiences and on the other hand, those white audiences Martin was so popular with years ago on "Saturday Night Live."  Will each audience be turned off by what is not usually their comedy or will both groups share the laughs?  In either case Latifah and Martin take the risk of Bringing Down the House, or turning folks  away.

With no pleasant characters the first segments of the film are irritating.  Charlene's crashing into Sanderson's house has the feel but not the look of Risky Business with Tom Cruise and Rebecca DeMornay.  Sanderson easily could have rid himself of her with just one call, but then the film would lose it plot and the two would not have the opportunity to change each other for the better.

While Sanderson cares only for his business, his wife (Jean Smart) has separated from him for that reason, Charlene forces her way into his life and is not a pleasant guest in the house.  Joan Plowright's the client with the big dollars is more concerned with her dog than the black servants who were part of her life as a child.  Missi Pyle's Ashley is as obnoxious as possible as she pursues old men for their money.  Even Mrs. Kline (Betty White) shows her disdain for blacks who enter the posh neighborhood.  The only character that consistently raises laughter and empathy is Eugene Levy's Howie, from the beginning Charlene is his dream girl - he likes girls that have something to jiggle.

So while the characters are introduced they have the disadvantage of the negatives that are a major part of their character.  While Levy rocks the audience each time he appears, it takes a little time for the misfits to blend their characteristics either to attune or to irritate into a rousing series of scenes which culminate in a black club where each one becomes "Wild and Crazy."  All leading to a riotous tangle of dance, battle, drinking and smoking that brings the house down.  The marshal arts battle between Latifah and Missi Pyle at the country club which took two days to film also brings comical delight.

Will this film begin a blending of different American humor for future films or will it be a failed experiment?  I don't know, but it worked for me.