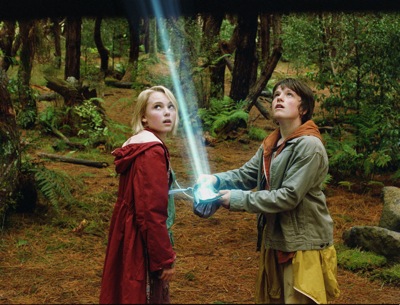 
This Walt Disney/Walden Media production, the same one that produced The Chronicles of Narnia, is a treat for the whole family. Disney appears to be returning to effective live action films to match the world of animation which has been so effective for the studio over the past few years.

Based on Katherine Paterson's award-winning novel, it is about two kids who share a special friendship, and use their fantasies to help get through the difficulties of school and childhood.

Sixth grader Jess (Josh Hutcherson) is a boy on the outside from the in-crowd at school, he lives with his parents and four sisters. Dad (Robert Patrick) doesn't have a great income so Jess shares a room with his younger sister May Belle and a baby, his only privacy is a blanket hung from the ceiling. To add to his humiliation he is forced to wear his older sister's hand me down pink-trimmed sneakers on a race day at school which is very important to him.

Jess is quiet at school and uses his talent for drawing to insulate himself from the bullies who taunt him both in the classroom and on the bus to and from home. But Jess gains an ally when pretty, spunky Leslie (Anna-Sophia Robb) moves in next door. She also is bullied, but her sunny personality and imagination help her shake it off. The two form a strong friendship as they explore a forest near their homes - to reach the forest requires swinging from an old rope over a stream.

Through Leslie's vivid imagination, she urges Jess to conjure up magical adventures for their secret place, which she calls Terabithia. The two fix up a dilapidated tree house and suddenly ordinary curious squirrels become flying attackers, small forest animals become ravenous trolls and hawks swoop down to lift them up to their magic special world.

The laughter the two share is something they both have need for in order to deal with the bullies, but it is especially important to Jess, as his understanding but stern father and difficult home life afford him little joy. The affection of a good music teacher (Zooey Deschanel) also helps.

The trailers emphasize the special effects of the film, but the emotional impact of the script comes from the children's everyday life and the friendship they develop and how it changes everything.