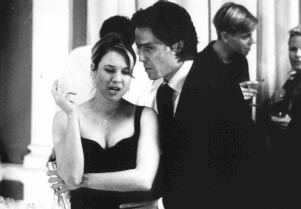 Bridget Jones's Diary is not that good, but it is wonderful.

Looking far less elegant than she did in her sophisticated yellow gown for the academy awards, Renee Zellweger plays Bridget, a thirty something single with a few pounds too many and fleeting confidence in her ability to attract a partner.

Director Sharon Maguire has an interesting vehicle in Helen Fielding's novel about a young British singleton.  As the story opens Bridget is spending a typical evening alone at home watching the TV believing she will always be alone, die a spinster and her body will be found three weeks after death eaten by dogs.  We learn all this as we listen to a rendition of "All by Myself" on the soundtrack.

Unlike other films which follow single women, no attempt is made to sex up Zellweger's Bridget; she is a bit over weight, drinks too much and smokes cigarettes constantly.  Her skills at work are marginal and she creates blue soup by accident for a birthday dinner party.  She is not slender and brilliant; she is very much like most of us - flawed and uncensored with a delightful appealing heart.

When her boss (Hugh Grant), one of those very desirable men she dreams of, sends her e-mail she eagerly answers and begins an affair with the handsome man about town.  But he leaves her at the "Tarts & Vickers Party" stranded in a playboy outfit, when the theme has been changed and she is forced to enter a more formal event with not much more than a bunny tail.

Around her affair with the boss, she frequently finds herself in the company of Mark Darcy (Colin Firth) who she has known since childhood.  A successful barrister, Mark is scheduled to marry a slender spider like woman who insults Bridget at every contact.  While Bridget's mother roams from the nest with a slick QVC type show host, Bridget spends evenings watching TV with dad and having dinner with her loyal single friends.

Using a smile reminiscent of Teri Garr's lab assistant in Young Frankenstein, her fortunes turn around and she finds men fighting in the street over her just as she is - even though she accidentally displays her large bottom on television while doing her new job as a TV reporter.

The mating dance swirls around and up and down until her diary is reviewed by Mark and she is forced to be aggressive and completely honest about her feelings.  Like Bridget, Sharon Maguire's film is far from perfect but the end result is completely captivating.  As we listen to the old standard "Have You Met Miss Jones?" we are eager to say "yes".