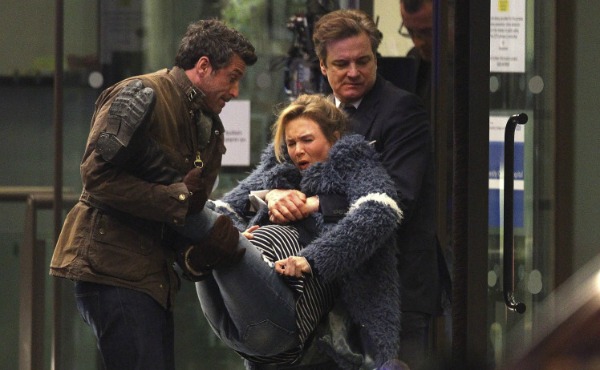 
Renee Zellweger returns to play the insecure, lovable Brit in this third film in the series.   Its been 12 years since Bridget Jones: Edge of Reason came out, and some things about Bridget remain the same.  She's still single, still celebrating her birthday alone wearing her pajamas and still getting herself into trouble.

However, there are also some big changes - she's broken off with the love of her life, Mark Darcy (Colin Firth), has slimmed down to her perfect weight and is a producer of a trendy television news show.

On a weekend outing to a festival with her girlfriend, Bridget meets Jack (Patrick Dempsey), a handsome, wealthy developer of a popular dating website. They end up spending the night together and believing it would never turn into a real relationship, she sneaks off in the morning while he's out getting her breakfast.

A few days later, Bridget sees Mark at a memorial service, and all of her feelings for him return.  They also spend the night together and again, Bridget has second thoughts and leaves him.  They go their separate ways, even though they clearly have strong emotions for one another.

A few weeks pass, and after a home pregnancy test gives her the news, followed up by a trip to the obstetrician (Emma Thompson in a funny role) to confirm it, she realizes she has to make plans for her baby.  She decides that the father of the child has to be told, but first she needs to find out who he actually is.

Bridget is in her 40's, but she usually behaves like a young girl who acts on a whim and deals with the consequences afterwards.. She will raise the baby by herself, but wants to give the father a chance to be part of the pregnancy also. She finds out that both men want to be involved. even though Mark is very upset about a new rival in the picture.

Mark is as buttoned up and stiff as ever, and Jack is a breath of fresh air.  The two men are funny trying to outdo one another to impress Bridget.  Trips to birthing classes are fun and the scene of them trying to carry Bridget to the hospital and through the revolving doors had me laughing out loud.

Renee is a good comedic actress, her character's clumsiness and penchant for getting herself into uncomfortable situations seem to come to her naturally.  Directed by Sharon Maguire, Bridget Jones' Baby is not the best of the series films, but it has its funny moments and is entertaining.  It was also great to see Renee back on the screen again.